“Full of high stakes, thrillers, and fantastic twists and turns, fans of Ready Player One are sure to love this addictive read.”

OtherWorld, the dystopian thriller, by Jason Segel and Kirsten Miller, is the first of the OtherWorld trilogy. The next two, namely OtherEarth and OtherLife, have already been released.
The story revolves around the main character, Simon Eaton, and has been told from his first-person perspective. OtherWorld is a game created by a company run by Milo Yolkin. It is actually the second one because the first OtherWorld was closed due to fewer players. It engages two of the senses: sight, and hearing. To play the game, you only have to strap a headset and download the OtherWorld software. The details of all the characters in the game are brilliant. It is impossible to believe that they are all just pixels, 0’s and 1’s underneath. But the biggest achievement of the game is that all the NPC’s, the Non-Player Characters have been given true AI. They are conscious of their existence. And that’s the biggest danger. 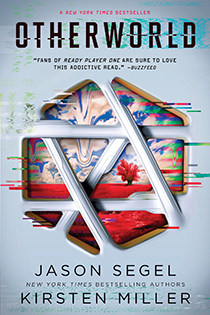 The Company’s latest invention is a device called the disc. It is a world-changing discovery. In layman’s terms, “it talks to the brain”, engaging all five senses, sight, sound, taste, touch, and smell. But the problem is that if you get injured in the virtual world, the disc convinces the brain to think that it is injured in the real world. Death in virtual reality means true death.
So, the Company stages accidents across many parts of the country to get lab rats for testing the disc. Hundreds of people have already died, being killed in the game.
The person who was the actual programmer of the game, James Ogubu, was careful not to give the characters true AI, for nothing that is real can be stable, as a program is supposed to be. Milo, wanting the game to be as much real as the real world, unlocked true AI to the NPCs. Their digital DNA combined to form new characters called the Children. They are conscious of their life and believe OtherWorld to be their native land with the players as guests. The players abuse and exploit them, while the Children kill them in self-defense. But all the headset players, after dying in the game, go back to setup and restart the game. But the killed Children don’t regenerate, for they aren’t part of the true code. They also kill the disc players, killing them in the real world.
Simon’s best friend, Katherine Foley, is one of those who have been forced to use the disc. In the game, she realizes that the land belongs to the Children and that the players are just intruders there. She tries to help the Children and receive their help in return.
Simon, not knowing that Kat is safe in Otherworld, decides to use a disc to go to OtherWorld. But death in OtherWorld could mean death in real life for Simon. Would Simon be able to help the Children? Or, would one more murder be added to the Company’s kill list?
One of the most interesting questions laid down by the novel is that just as the Children live in OtherWorld believing it to be their real world, can we also be pieces of true artificial intelligence conjured up by a simulation? Has The Matrix truly glimpsed the real life that we live?

The dystopian future imagined in this novel might not be as far away as readers might think. We are moving into the domain of artificial intelligence, and true AI isn’t far away. The question is would these radical advances in technology help us, or would they act as a catalyst for an early end of Homo sapiens and the Earth as we know it?