Jen Brister - The Other Mother

Stand-up comedian, writer and actor, Jen Brister had twin boys, with her girlfriend Chloe, aged 39, now aged 44 she looks back at this experience in her brutally honest and laugh-out-loud funny book, The Other Mother.

The Other Mother explores Brister’s experience as a gay mother who is not biologically related to her sons and all the insecurities that come with that. Will they look like her? Will they love her? Will she connect with them in a bond as strong as Chloe’s? These are all questions that Jen Brister finds herself asking at some point during the rollercoaster experience of becoming a parent. Throughout the book, she opens up about her mental health during this time and how, with hindsight, poorly she dealt with it. 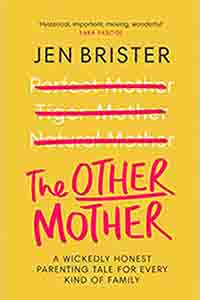 Jen Brister’s writing is not only open and honest about her insecurities about being the ‘other’ mother but also about the insecurities and fears all parents can relate to. She delves deep into the struggles she and her partner have, particularly during pregnancy, childbirth and the early stages of bringing up the twins.

From the heartbreak of failed IVF and the often-uncomfortable realities of being pregnant with twins to the horrific truths about childbirth or in Chloe’s case caesarean sections, there is very little Jen Brister doesn’t cover in her account of becoming parents.

Brister also doesn’t skirt around the harsh realities of parenting once the babies are born either. From sleepless nights, babies that won’t eat and mysterious illnesses that doctors don’t take seriously to toddlers who have tantrums when they come into contact with dirt or nature, Jen Brister leaves no frustrating detail of parenting out. It is this truthfulness and relatability that inevitably leads to some of the most hilarious anecdotes in the book that will have you roaring with laughter. In fact, Jen herself explains in best in the book when she says: “As you can probably tell by now, I don’t shy away from being brutally honest. I think the funniest humour comes about when you can break down the pretence and convention and reveal the painful, all too-human truth at the heart of almost any subject.”

The Other Mother is not only a hilariously funny and authentic read but it is also a new kind of parenting book which portrays the changing landscape of parenting. We should no longer expect every family to look the same, as Brister explains to her own children; some kids have a mum and dad, some have two mums, some have two dads, and some have just a mum or just a dad, and all of these families share some of the same problems of parenting.

As a self-described ‘beige lesbian’, Jen Brister offers an insight into what it’s like being the ‘other’ mother in the relationship and the questions she often has to answer. She also goes some way to fill a gap in a growing group of parents who have a slightly different experience to heteronormative couples. From conceiving outside of the ‘norm’ to deciding what to call yourselves as parents (to avoid the confusions of children yelling mummy at two people), Jen Brister captures a snapshot of what parenting looks like in our modern society.

As an outspoken feminist, it is not surprising that Jen Brister’s book too has a fantastically feminist undertone. From highlighting LGBT+ family experiences to her praise of single mothers who are often berated. Brister writes, “If you’re a single parent reading this, you have my undying respect, because you’re a bloody champion! Single parents are heroes because they have to be everything to their kids… As if being a single parent isn’t hard enough without being told you’re a bloody burden. You’re not. You, reading this right now, you are amazing!”

What’s more, Jen Brister talks about how she’s raising her own sons to be whoever they want to be, wear whatever they want, not feel threatened by equality or those who don’t look or act like them, to express their emotions and most importantly, to be feminists.

Jen Brister’s The Other Mother is a triumphantly truthful, honestly hilarious and fiercely feminist account of a modern family that anyone who enjoys her comedy will enjoy and that every parent (and even those who aren’t parents) can relate to and laugh along with.