“The pacing of the book is perfectly controlled to draw the reader in.”

The Confession by Jessie Burton is an elegantly written and impeccably constructed narrative divided into two timelines. In the 1980’s we meet Elise, a young woman who is swept up by the enigmatic Constance, a woman she meets on Hampstead Heath on an otherwise bleak winter’s afternoon. Constance is a successful novelist on the brink of huge fame as her first novel is about to be filmed in Hollywood. Rich, glamorous , self assured and selfish, to Elise she is irresistible , and so Elise follows her to L.A..

Meanwhile in the current day we meet Rose, Elsie’s daughter. Rose is unsettled in all aspects of her life, working in a coffee shop to make ends meet, and living with her fiance Joe but unsure of the future of their relationship. 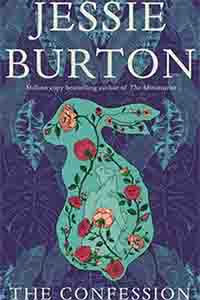 She has always wondered about her mother, who walked out when Rose was just a baby and has never been heard from since. Her father has always remained tight lipped about what happened but eventually reveals to Rose that her mother knew Constance, and that they had been lovers.

Desperate to find out the truth about her mother, Rose engineers a way to meet the now reclusive Constance without revealing who she really is, and takes a job as her assistant in the hope that she will be able to learn what really happened. The thing is, is it sometimes better to let sleeping dogs lie, or is it better to find out the truth no matter how much it hurts?

While I have come to expect beautiful prose from this author, and there was certainly plenty of it to be found in this book, what I loved most were the wonderfully realised characters. It is very easy to empathise with Rose, a woman struggling to figure out her future while hoping that the answers she seeks are in the past. Some of her actions are certainly questionable, but they are also understandable in the context of the story being told., and in the end she realises an important truth. ” I had to stop looking at myself and finding myself wanting. I had to stop facilitating other people’s lives at the expense of mine”

Constance is a mesmerising and magnetic character, and it is very easy to understand her allure to both mother and daughter, in different ways. For Rose she is in some ways a maternal figure, or at the very least a link to the mother she never knew, but also a determined, independent, smart and kind friend, Elise may not have experienced the kindness of the more mature Constance, but she certainly saw the charm , allure and intelligence of the woman.

The pacing of the book is perfectly controlled to draw the reader in, as the truth of what happened between Constance and Elise is revealed in one time line, while in the other the risk of the truth being revealed to Constance is yet one more thing that Rose is struggling to deal with. I found myself completely immersed in the story, so was a little surprised at the slightly abrupt way it ended, and if I had to find a flaw in this excellent book, this would be it. but it is a very minor gripe about a very good book.