“Compassionate, insightful and witty, The Hunter’s Friends is a book to read and to keep returning to.”

The NRI editor of a UK journal wrote to me after I had submitted a book review, wanting to know why Bengalis were so determined to celebrate the British Raj. For her part she was going to do her best to ensure that that blotch was erased from history.

The book she was referring to on that occasion was written by John Lang about life and times in the Himalayan Club. I am fairly certain that she would have similar comment to make about The Hunter’s Friends by Jim Corbett. Speaking Tiger has taken sections of Corbett’s work and put them together to give readers a glimpse into the people he lived and hunted with. 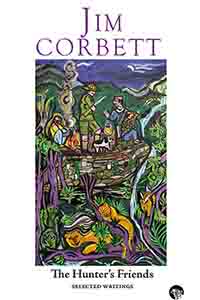 Corbett writes from the point of view of an Anglo Indian landlord. His task is to take care of his tenants in sickness and in health and ensure that they are in no danger from wild animals. The ‘poor of India’ he feels are gems of their kind, who never forget kindness and who ensure that those who live amongst them are in no danger. This is why he has no worries about leaving his sister alone when he goes to war. He seems to be well aware of their problems, money lenders for example who trick people into never ending debt, low caste people unable to scrape two coins together, opium addicts who had to be dragged back from the brink of death. Many of the stories tell tales of his own generosity and understanding towards those he felt responsible for – a packman he encounters while tracking the leopard of Rudraprayag calls him a sadhu.

Underlying it all is his understanding of the relationships between people and nature. Putli and Kalwa for example, is probably one of his best known anecdotes about a brave little girl and her buffalo who walk the jungle trails without fear of man-eaters. Or there is Sher Singh’s buffalo Lalu who defies a tiger and the cautionary tale a tiger taught Kunwar Singh who could not climb trees.

Apart from anti British Raj people, there are also those fierce animal lovers who would cry out in outrage at Corbett’s determination to shoot a tiger who was getting overly used to human contact and was therefore likely to prove a threat to his sister who went for walks in the area and to the villagers. The episode of Ranthambore’s Ustad comes to mind – where the tiger was removed from the national park to a zoo enclosure because a guard had been killed. Activists insisted there was no proof.

Corbett who knew his tigers was determined to remove the threat before a human being was harmed – and of course, in his time tigers were still not under threat. While he was a professional hunter, Corbett was fiercely protective of animals and angry with the carelessness of white hunters who wounded an animal and left to catch some pressing social engagement, while the wounded animal became a threat to any villagers it encountered.

What comes through is his love of nature and animals and his ability to tell a good story without boring the reader. This encapsulated version of his writings while accessible has its faults – it cuts off a story with Corbett sitting in a machan waiting for a man-eater, leaving the reader in a cliff hanger of a situation.