“Salem Falls tells the story of a man who is trying to outrun his past but is caught up in a modern-day witch hunt.”

Again this is another Courtroom drama from Picoult, a subject as a writer she seems so familiar with.

Salem Falls follows the story of Jack St Bride, a teacher, wrongly accused of raping a girl. He has served a prison sentence and moves to Salem Falls upon his release. Eventually he finds work in a diner, working for a lady called Addie.

Just as he is beginning to form a relationship with Addie, Jack St Bride is again accused of sexual assault. His defence attorney Jordan, is brought in to make sure that he is not convicted of the same offence again. 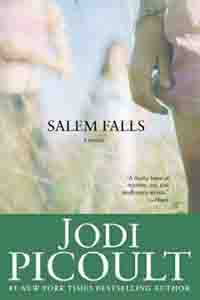 The story does tell of the sexual assault so is not to be read by anyone who may be disturbed by this topic, this is a gritty book, evoking strong sentiment. Jodi Picoult really does the novel justice. The reader is left guessing whether Jack was actually innocent in the first place. The book flits from past to present.

I found myself reading this book under my desk at work, in my lunch break and did not put it down when I got home until I had finished.

This book will not disappoint you.