Joel Hayward - The Leadership of Muhammad:

“In addition to being historically informative, it offers valuable lessons about leadership that could help world leaders, decision makers, teachers, and people from all walks of life to communicate and lead better.”

As a Muslim I guess I always bought into the logic that, because Muhammad (peace be upon him) was a Prophet of God, he must have been a great man and because of that he must have been a great leader. In other words, his success as a leader was determined by God. While this is a reasonable religious position, it robs Muhammad of the very thing that matters most to us as Muslims: his humanity. He isn’t much good to us as our example (“sunnah” in Arabic) if God had made him perfect at everything and all his successes came to him easily and automatically. 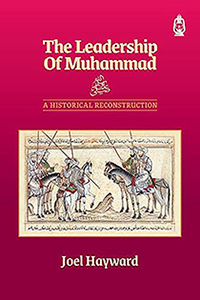 The historian Joel Hayward is a Muslim, and even a quick internet search reveals that he’s committed to his faith, yet if I didn’t already know that he was a Muslim I would find nothing within his newest book, The Leadership of Muhammad: A Historical Reconstruction, to indicate that religion has shaped his analysis in any way. Hayward approaches the life of Muhammad with remarkable scholarly detachment and objectivity. He had previously published books on non-Islamic leaders, including Horatio Lord Nelson, and his approach to all of them is the same. Avoiding hagiography, he creates a psychologically believable portrait of Muhammad by critically interrogating the earliest sources and by explaining Muhammad’s ideas, actions and patterns of behaviour in terms of the historical, geographical and cultural context in which he lived. Hayward demonstrates that the seventh century Arabian Peninsula was a brutal and unhospitable place in which tribal competition and constant warfare dominated what we today call politics. Bedouin ideas of chivalry, honour and manliness greatly influenced the worldview of all the Arabs, including those who lived in villages and towns. They greatly influenced Muhammad, and his leadership ideas and practices relied heavily on existing tribal chieftain behaviours. This is not to suggest that the religious dimensions he introduced already existed in a similar form. Hayward reveals that Muhammad’s greatest innovations were in this sphere.

Hayward reveals that, as both a military leader and diplomat, Muhammad acted within the norms and expectations of the age, with the exception that he placed religious affiliation above tribal affiliation when organizing the composition, and assigning the leaders, of the armed bands that he sent out on raids. Hayward explains that raiding was an ordinary and expected part of Arab society and was a way that young men learned to live off the land, form strong brotherly bonds and be valorous, skilled, and crafty. Far from raiding (the seventh century form of cattle rustling) being immoral, it was a highly esteemed and socially approved activity that developed virtues and created reputations for courage and honour.

Hayward’s Muhammad is undoubtedly a remarkable historical figure. He had an uncanny intuitive grasp of human nature and knew how best to win over, motivate, and inspire. Appealing mainly to the Arab youth, to whom he often delegated significant responsibility, he advanced a crystal-clear vision of a better future, and successfully convinced increasing numbers of the people around him that they were a necessary part of bringing that vision to fruition.

Hayward’s book is compactly written and argued. In only 179 tightly written pages he creates a thorough and detailed explanation of what Muhammad thought and did as a leader. He studiously avoids psychobabble and recourse to the types of modern leadership concepts and jargon that ruin so many historical accounts by making anachronistic assertions that couldn’t possibly be true. Hayward is clear: Muhammad did not practice this or that modern theory of leadership. He did what worked in the brutal seventh century world and drew upon examples and behaviours that he learned from the leaders he grew up observing. That does not mean that Muhammad’s leadership was in any way ordinary. Hayward reveals that it was extraordinary, but it was extraordinary precisely because Muhammad was highly observant, mentally agile, open to being wrong (he managed the psychologically complex task of being able to separate divine revelation from his own thoughts), quick at learning what worked and what did not, and highly sensitive to the hopes, desires and fears of the people around him.

I was struck by how consultative Hayward reveals Muhammad to have been. He adopted the Arab system of “Shura,” of consulting with his community, and especially with a trusted circle of advisors (some of whom were as young as his children) on all key decisions. He also had the common touch, that rare ability to relate to and appeal to ordinary people from all walks of life. Hayward uses examples from the ancient Arabic sources to demonstrate persuasively that people wanted to follow Muhammad because of the rapport with them that he was able to create. Muhammad seemed, writes Hayward, “in many ways to be a normal man with ordinary interests who smiled and cried at, or liked and disliked, many of the same things as everyone else.” I must confess that this was a surprising revelation to me. I grew up with a very different view; like most Muslims I always believed that Muhammad was significantly unlike his people.

I strongly recommend The Leadership of Muhammad. It is a ground-breaking, meticulously researched, objective account of the leadership of one of history’s most influential humans. Hayward tells us a lot in a few words, but what he reveals is highly illuminating and of wide interest.