“A comprehensive and insightful biography… Paul has produced an excellent treatment of an unquestionably impressive life.”

This is the life story of the longest sitting Chief Justice of the Supreme Court in American History. Marshall was the last of the founding fathers. He served in the continental army at Valley Forge with Washington, he was a self educated attorney who had a successful law practice before entering public life.

He was a cousin of Thomas Jefferson and they were complete opposites in their views of our Government. Jefferson opposed the constitution while Marshall fought for its enactment. Both served in France as ambassadors, Jefferson looking the other way at the abuses of the French Revolution while Marshall abhorred it. 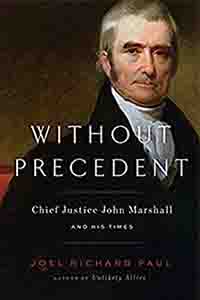 Marshall was appointed by John Adams as Secretary of State and was then appointed Chief Justice by Adams just before Adams left the presidency.

The true greatness of Marshall is as Chief Justice. His many decisions helped ensure the power of the Judiciary in our government. His decisions ensured the Courts authority to declare Federal and State laws as unconstitutional and his ruling of Federal Law superseding State Law were the main reasons are Constitution works the way it does today.

With a well written narrative the book will not be difficult to read as some non fiction tends to be. His exciting life, including his presiding over the trial of Aaron Burr as a traitor are compelling to read, and the sad life of his family will make you wonder how he continued to have the emotional capacity to go on and accomplish what he did.