“Two superstar authors pair up and really deliver the goods, dishing up a terrific high-energy tale…threaded with generous measures of comedy and savvy counsel.”

Will Grayson Will Grayson is a great collaboration between John Green and David Leuithan. I have read a lot of John Green books so could easily read his work in this book, but I’ve never read a David Leuithan piece so I found it quite difficult to adjust to his writing style.

I don’t know if it was his style of writing or just the way that they choose to separate the two Will Grayson, but I found that the way David’s section was written in all lower-case really off putting. Don’t get me wrong I loved the storyline, but the way it was written throw me off. 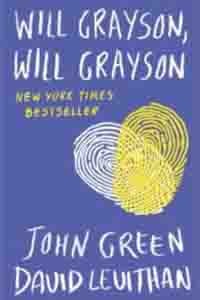 The story goes along little something like this. Two boys, both named Will Grayson, one Will Grayson, the one who was written by Green, feels in the shadow of his best friend Tiny – “the world’s largest person who is really, really gay”. This Will Grayson is straight. The other Will Grayson, the one that is all in lower-case is quite depressed – he’s not got all that many friends, and the one that he does have…you’ll have to see what happens to her. This Will Grayson is gay, and the two meet in a very unlikely situation: in a porn shop. But believe me, it’s not as weird as it seems, and believe me also when I say that the element of this novel is not both the Will Grayson’s getting together. They don’t. Really they don’t.

It isn’t really an adventurous or hugely exciting plot and it’s almost simple, but it’s pulled off with such sensitivity and the two stories are so different and yet so closely and intricately entwined that it doesn’t need to be.

This isn’t my favourite John Green book or even a book that I would usually pick but it is a good read if you’re looking for something a little different and if you’re over 13 or so as there is some bad language, which I see as necessary in a novel portraying teenagers. It’s an almost reckless but sweet story of emotion and deserves to be commended.