“The unmissable first novel from bestselling and award-winning author of THE FAULT IN OUR STARS.“

Though John green is mostly famous for The fault in our stars, Looking for Alaska (his debut) is an equally amazing ( if not better) novel.

Looking for Alaska has been hyped and criticized for vivid sex scenes, smoking, illegal drinking, drug usage and Whatnots. This in turn, has taken away the focus from a book that’s deep, insightful and poignant. A book full of beautiful metaphors. What people do not understand, is that these habits define the characters as much as their other actions do. They are not just a bunch of teenage alcoholics or lost people, they are also teenagers interested in reading, learning, last words, rapping. 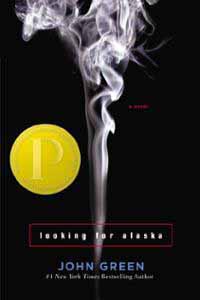 I’ll begin with tackling the issues and disagreements with this book. First, is the obvious glorification of Alaska by Miles ‘pudge’ halter. He defines Alaska by an endless string of praising metaphors. Well, readers should understand that pudge believed himself to be in love, and isn’t love/infatuation is a blindfold for the shortcomings of our object of affrction? Coming from an environment where he was ignored, had no friends and had a pretty average, monotonous life; it’s no surprise that he falls for Alaska, an absolutely vivacious, extrovert and (definitely) not average teenager. He’d come to Culver creek to seek his ‘Great perhaps’, he’d decided that Culver creek wouldn’t be like his old school at all, it was natural fir him to find a digression in the form of Alaska.

Second, is the excessive use of nicknames. As any reader would note, most of the Nicknames were made up by Alaska. This is a clever technique by the author to give a reader full idea of a character’s actions/ nature by the use of a nicknames. ‘The Eagle’ tells you that this character is a keen, hawky observer, someone who won’t miss a trick. And to those who say that none of the teenagers use so many nicknames – well, they must be generalising all by a few! Even my classmates, in highschool, excessively used Nicknames. No bearing in that argument, really.

Another argument is the blow job and makeout scenes in the book. I understand that much has been said on this topic, it has been criticized and defended; yet, truth is , the scenes show a very beautiful an obvious contrasts. While the blow job scene is very detached and almost without any heady feelings, the makeout scene is an intricate tapestry of emotions and observations. It was supposed to give the reader an insight about Pudge’s feelings and level of attachment for both the girls. It was necessary to show how Pudge desperately holds on to the ‘to be continued’, to show how unfair he felt it all was.

Those who say that the portrayal of highschool was glorified or untrue or fantasy, perhaps they hate Harry Potter too, since the world in that book is also fantasy and untrue and glorified? An author us supposed to take you in a different world of imagination – that’s his job. That’s what keeps us hooked. These arguments being answered, I’ll like to tell you what I feel about it.

Alaska is a character who is much more than sex crazed, strawberry hill wine drinking, profanity spouting teenager; as she’s construed to be. She’s smart, intelligent, reading addict, lively and a passionate feminist. She is much more than what Pudge thinks of him, something that Alaska reminds him of constantly. She was someone who can never forgive herself, she had much more on her conscience than a normal teenager. It is heart wrenching that how so many people knew about Alaska, but no one knows her. That she’s ‘unexplored’. Her death is that one point from where all her friends begin questioning everything. Before, they were all 16- something’s, satisfied. Her death makes them all mature, they learn to deal with pain, loss and unanswered questions.

The theological aspects of the book are astounding too. Pudge and his friends, in submitting a simple essay, learns so much about love, life and death. Discussions on religion, life and death are something that help these characters deal with their problems. It’s surely praiseworthy.
It is a story of learning to forgive themselves and forgiving Alaska, to understand and accept that all of them made mistakes that cost Alaska her life. They had to learn to live with not knowing. Not having all answers. Frustration. Following all the events, all major characters find themselves, but do not find Alaska, for whom they keep looking, searching. They learn to live with that.

This book should have been much more appreciated than it actually was. Anyone who’s lost someone special can truly connect with this book.
Everyone who reads this book should tell Alaska that she was loved. That she is forgiven. That it’s okay. And to her friends : We understand. You’re forgiven. We’re proud of you.

Are you someone who likes happy endings? Well! Then I better warn you. This book isn’t for you. But if you are that one who seeks an adventure, a nerve racking incomplete romance, a chill down your spine that you get when something extremely unexpected happens, then you may want to give this a read. Not that it has adventures all over.

It isn’t a James Patterson mystery. It is John Green telling you a story that can make you laugh and giggle on one page and move you down to tears on the next one.

For those among us who have grown up to think that there is nothing called “The Great Perhaps”, Alaska Young, makes you re-think your philosophies. She is a guilt-ridden child who has taken to all kind of addictions to make sure that her guilt doesn’t kill her. But do we know what’s in store really? She makes you think about “What-ifs” and it can make your soul shake and mind rattle with thoughts. Things left unsaid and undone can break you but you still have to go on, don’t you?

Signing off with a beautiful quote –

“…….There were so many of us who would have to live with things done and things left undone; Things that did not go right, things that seem OK at the time because we could not see the future. If only we could see the endless strings of consequences that result from our smallest actions. But we can’t know better until knowing better is useless…….”