“The writing is gorgeous, and the plot is as beautifully constructed as a musical work by Bach.”

“A Prayer for Owen Meany”

“I became a Christian because of Owen Meany.”

This is the intriguing final sentence in the memorable first paragraph in this beautifully written book. Everyone else starts their reviews mentioning “Owen’s wrecked voice.” Owen’s voice is exceptionally important to the plot line, but I was hooked by the final sentence, personally.

Owen is a small, strange, bullied son of working-class parents who own the granite works in a small New Hampshire town. Johnny Wheelwright, the narrator, is the son of the attractive, vocally talented Tabby and a mystery father. The Wheelwrights pass as “Old money” in this small town. Owen accidentally kills Tabby by actually hitting the baseball in a Little League game. 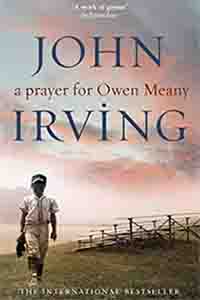 The book follows the high jinks and heart breaks of these two boys as they grow up and go to the local private school, local university, and then decide what to do about going to Vietnam. Acting in a local production of “A Christmas Carol,” and a local nativity pageant the Christmas after Tabby is killed proves life-changing for Owen b/c he is POSITIVE that the tombstone Scrooge sees in the play actually has Owens’s name and date of death on it. And he plays baby Jesus in the nativity. Both of these events matter in future plot lines, as does the fact that Owen is SURE that God will reveal Johnny’s mystery father to him in time.

I think my favorite part of the story is about the VW Beetle incident after Owen is kicked out of the local private school. I seriously laughed out loud. It is really bothersome, but I also like how Owen kept Johnny out of Vietnam.

The book ends as a massive tearjerker w/ Owen sacrificing himself for a group of children, EXACTLY as he’s always seen himself in a recurring dream. This really ties in w/ other scenes in the book. And there are actually TWO prayers for Owen in the book, maybe three, of you count the final sentence in the book.

I was moved beyond words by this book. The writing is gorgeous, and the plot is as beautifully constructed as a musical work by Bach. Thank you for encouraging me to read it, Gloria!