“John Simmons is the best writer you think you haven’t read. In fact he is one of the architects of the language of our daily lives. With his novel Leaves the secret is now out.”

Ophelia Street, 1970. A street like any other, a community that lives and breathes together as people struggle with their commitments and pursue their dreams. It is a world we recognise, a world where class and gender divide, where set roles are acknowledged. But what happens when individuals step outside those roles, when they secretly covet, express desire, pursue ambitions even harm and destroy?

An observer in the midst of Ophelia Street watches, writes, imagines, remembers, charting the lives and loves of his neighbours over the course of four seasons. And we see the flimsily disguised underbelly of urban life revealed in all its challenging glory. 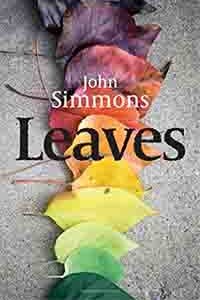 As the leaves turn from vibrant green to vivid gold, so lives turn and change too, laying bare the truth of the community. Perhaps, ultimately, we all exist on Ophelia Street.

The residents of Ophelia Street are a mixed bunch. Keith Russell lives with his wife Brenda and son David. Keith is the character that dominates the street. With his idealistic principles and his yearning for Ophelia Street to be the perfect example of a socialist society, he gives no-one an easy ride.

The Fermins; Gerald, local factory owner, and Selene, his sister. After the death of their parents twenty years previously, Gerald took it upon himself to look after Selene, although smother her might be a better word. Her life is slowly leaking away in his house of gloom.

Robert Johnson is the egotistical bully who drives fast cars and manages to get his hands on two of Gerald’s ‘possessions’.

This is a beautifully written book which is split up into the four seasons. The descriptions of the different seasons are vivid showing the street in all its different colours and the way it changed throughout the seasons.

But this is ultimately a story about the people, the residents of Ophelia Street. The characters are so well-drawn: deep and complex. We follow them into their humdrum lives, follow their sorrows, hopes, the drudgery, the hopelessness of no future – “without a future the present becomes eternal” – how true.
But the event that rocks the street is what causes change and many of the residents to re-think and maybe find themselves a future.

The cover of the book with the leaves changing colour through the seasons is really effective and the picture is repeated in black and white through the book at the start of each season and it really does make the book feel extra special.

I really loved this book and the characters have stayed with me since I finished. It has lots of different themes running through: family, memory, idealism, but the biggest one is perhaps just life.
****1/2