Rape and the Justice System in a College Town

“A stark, powerful, meticulously reported narrative about a series of sexual assaults at the University of Montana ­ stories that illuminate the human drama behind the national plague of campus rape“

There was one thing that most surprised me while I was reading Missoula: Rape and the Justice System in a College Town by Jon Krakauer. 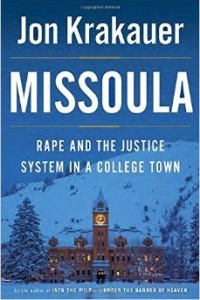 In Missoula, Krakauer examines the rape culture that currently permeates in the minds of the citizens of Missoula, MT. Krakauer tells the stories of several different women who have suffered from sexual assault at the hands of men they knew and went to college with. He follows their stories from the occurrence of the crime, to the aftermath, and, for very few, to the courts. Even rarer, Krakauer follows this stories to justice for the victim.

Throughout his book, Krakauer examines the culture of rape in a few different ways. He makes a point to show the reactions of the (accused) perpetrators. One man acknowledged what he did was wrong (thereby showing comprehension that it was his actions that were the problem), while another man is described as crying and being very upset when being told of his accusation. The difference is that the second young man was upset because the victim was upset and felt bad, not as the result of any of his actions. This idea is the keystone to rape culture in the United States, especially in the University setting. All the “villains” in this book (I use the term to describe the real-life people whose actions made me cringe) will readily admit that what the victims are going through is unfortunate, but, in the same breath, the villains will justify the men’s actions. Whenever the court system is invoked, not only did the men do nothing wrong, but now they are scapegoats for these women who are nothing more than rejected lovers.

Adding fuel to the fire is Krakauer’s reporting on how these cases are handled by the Missoula justice system, particularly at the hands of the lead prosecutor, a woman, who comes across as the antithesis of a respectable female, and not because of adjectives, metaphors, or imagery Krakauer used to describe (there was none). Instead the reader’s frustration with the prosecutor comes entirely from her actions. Throughout this book, the actions of this prosecutor feel like a slap in the face. She demonstrates not only the prevailing attitude of blaming the victim, but takes it one step further. I will not discuss her plot points in detail in this review, but if you fling the book away in disgust several times while reading it, I would guess it has something to do with her.

Sexual assault is a horrible violation of trust. It causes PTSD, anxiety, and metaphorically ends a person’s way of life by forever altering all they knew and how they lived up until that point. The fact that these occur so prevalently in the University setting is not unique to Missoula, MT, and neither is the reaction people have toward these crimes.

Crimes of this nature have one ally and that is silence. The only way to truly fight the culture that promotes sexual assaults by lack of punishment and victim blaming is to talk about these things. With Missoula, Krakauer creates another blow in the fight against this horrendous reality.