“Clements has distilled in this small volume a cracking history of the Silk Road.”

The Silk Road was one of the world’s earliest and richest trade routes that ran from England to China – even though most historians would end the road having grounded it in Europe. For the Chinese the road ran west – marked by an installation of a caravan of camels in Xian and a sign which marks it as the final stopping point of the road.

Clement’s biography begins without any flourishes – there is no real need since the road is full of histories, tragic, exotic and mysterious.

Fringed by the Taklamakan Desert where no plants grew because the area had been polluted by the body of a murdered god. Even though there were desert regions where cultivation was possible because the land lay below sea level and underground water found its way near the surface. 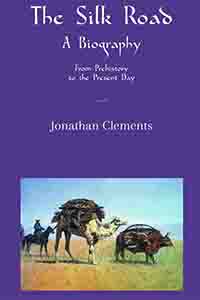 Like most trade routes, money, politics and religion flourished followed by art and culture. Clements tells a tale of struggles for power, the Chinese striving to take control of the fringe desert tribes who were more Muslim than anything else eventually. His story mentions Marco Polo who was so busy describing the cold and the towns he encountered that he forgot to record any details of Chinese cultural life like foot binding. The name of the road was given by a German, Ferdinand von Richthofen, the uncle of Snoopy’s famous Red Baron, and caught the world’s imagination with its romantic overtones.

Clements efficiently organizes his biography according to the various regions and dynasties, mentioning the legends in the first part – at the end of the Silk Road was a woman who sat spinning silk from her mouth for example. Roman men mourned the stuff as ruinous to their women’s morals, not to mention being ruinously expensive.

Clements writes that paper was possibly the most important commodity traded on the route with its implications of changing the face of civilization, but it was overshadowed. While he has stories and anecdotes, his style is taut, covering the ground of centuries economically.

The second part of the book gives the traveller valuable advice on what to carry for a journey down the Silk Road, when to go and what to see. This rather takes away from the biography part of the book by bringing it firmly down to earth. One would have expected a hand filling volume of the wonders of the Silk Road as the term ‘biography suggests’.