An Antidote to Chaos

“In a different intellectual league. . . . Peterson can take the most difficult ideas and make them entertaining, He is fast becoming the closest that academia has to a rock star.”

What are the most valuable things everyone should know? This is the question that sparked Jordan Peterson’s meditation 12 Rules for Life, a singular addition to the self-help genre.

Instead of reinforcing happiness as the goal to life, Peterson advocates a search for meaning ‘as a defence against the suffering that is intrinsic to our existence.’ He offers a devastating estimation of the human capacity for evil, quoting Solzhenitsyn: “the line dividing good and evil cuts through the heart of every human being”. This grave message and stern philosophy proves an odd contrast to a conversational, folksy style style of writing and incongruous sprinkling of smiley-face emoticons. 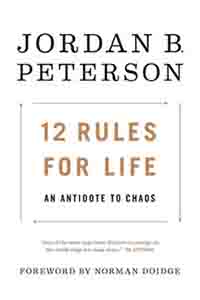 In essence, the book is an exhortation to the individual to shoulder the burden of existence and make the kind of life choices that will allow one to function efficiently and productively in a harsh and unfair world.

Mere anarchy is loosed upon the world

(The Second Coming, W B Yeats)

Demand highly of oneself, Peterson encourages, and discover a profound potential resilience. When setting out his twelve rules, Peterson brings to bear examples from his clinical practice and private life, at times to deeply moving effect. In amongst this is a far more discursive, rambling, digressive, pleonastic, circumlocutory look at philosophy, religion, and literature. His primary focus in on ‘ancient wisdom’ and the archetypal truths embedded in myth, plumbing the Bible and Disney stories alike – Peterson has a particular penchant for Pinocchio.

The central theme in 12 Rules for Life is the dichotomy between order and chaos, which Peterson thinks of as ‘the constituent elements of the world as drama’. He encourages one to walk a tightrope between the two: ‘To walk that border is to stay on the path of life, the divine Way’. In so doing, the unknown can be confronted without becoming overwhelmed. The trouble is, his advice – much of which is good old-fashioned common sense – is obfuscated by needlessly complicated recourse to myth and philosophy. He slides in and out of metaphorical speak and makes strong use of proselytising Christian rhetoric. I do not share Peterson’s reverence for ‘ancient wisdom’ contained in the great myths, which for him is primarily the Bible, but it’s fascinating to have somebody well-versed analyse these stories for psychological truth in a less perfunctory manner than I would have attempted myself. He does this with great creativity and insight. But he goes too far, describing the narrative sequence of Genesis as ‘almost unbearable in its profundity’. He has also apparently ‘learned that these old stories contain nothing superfluous’. What! Because the bible myths have stood the test of time, Peterson argues, they must in some sense be true. It is difficult to tell whether he means true as in God the mover and shaker decreed it thusly, or true as in psychologically relevant because of underlying evolutionary drives in human cognition. He remains frustratingly non-commital.

My sense is that Peterson has fallen into the trap of reading into a story what he wants to see. For example, one of his central themes is derived from the Christian ethic of earthly sacrifice in the present for future celestial gain:

God said to Abraham, “Kill me a son”

So how does Peterson’s injunction to bear individual responsibility map on to the other teachings of christianity where the sacrifice is made by someone else on your behalf, or, worse, when you are enjoined to sacrifice another person? In my opinion, these are unavoidable obstacles in Christian morality and point more towards the primitive, desperate aspects of the ‘collective unconscious’ that composed the stories. Similarly, if the point of this sacrifice is to forgo the present for future gain or growth, how does Peterson circumvent one of the central teachings of the Sermon on the Mount, to take no heed for the morrow? His unconvincing riposte is made, characteristically, through a circuitous analysis of Nietzsche, Dostoevsky, Jung, and Peter Pan.

Throughout the book, there are a worrying number of words awarded significance through capitalisation: Order, Chaos, Being, Way, Creation, Destruction, Fall, Paradise. Peterson equates Chaos, a word with immediate pejorative connotations, with ‘the eternal feminine’. This may work to describe an amorphous, generative component of ‘Being’, but I fail to see how it usefully describes women as individuals. Peterson makes no effort to explain other than stating that it is so. One gets the uneasy feeling that perhaps one is being dazzled with pseudo-profundity, dare I say bullshit. I would like to see him clearly define the limits of his morality without employing these fuzzy concepts. What makes something good, bad, neutral? Is it God that defines human morality, or is it evolution and innate rationality. Peterson leaves this unclear.

As Norman Doidge writes in the excellent foreword to the book, ‘the dramatic tales in the Bible illustrate why we need to follow certain moral codes of conduct and offers warnings of what will happen if we don’t – this makes the stories captivating and easy to understand.’ With this book, Peterson forcefully recognises this need for structure, while exposing the dangers of ideology; he cautions against any too simplistic answer to the complexities of life. Peterson has undoubtedly exposed a genuine need and hunger for meaning and his fierce dedication to seeking the truth is admirable.

Overall, a rich, frustrating, provocative read. One doesn’t quite know whether to lob it against the nearest wall, or delve back in for a second read.