“Cassaras’s propulsive and profound first novel, finding one’s home in the world—particularly in a subculture plagued by fear and intolerance from society—comes with tragedy as well as extraordinary personal freedom.”

Within the speech and narrative, Cassara peppers in Spanish which not only gives a unique sense of voice but reminds readers of the world they have stepped into. If you don’t understand much or any Spanish, this may make the novel harder to read, however, much of the Spanish phrases are repeated so it wouldn’t take long to pick up these words and find the novel following much quicker. 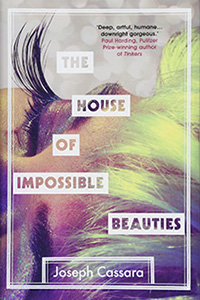 The House of Impossible Beauties is set in predominately 1980s New York – but flashing back to the late 70s and journeying forward to the mid-90s the follow the characters’ lives and explore their pasts – The House of Impossible Beauties reflects the Harlem Ball scene and the LGBTQIA+ people who lived within the community. It is an exploration of gay and transgender lives and the struggles they faced during this period of time.

Some words, for example, those spoken by Dorian Corey, who effectively narrated much of Paris is Burning are written almost verbatim on the pages which brilliantly brings to life the character by mimicking the way Corey spoke.

In fact, much of what happens in these character’s lives in the novel follows what happened in their real lives, however, the author notes that this is a fictional narrative and therefore, the “portraits of the characters who appear in the story, along with the events and journeys covered, should not be taken as a historical record.”

For those who are reading this novel having already watched Paris Is Burning, you may find yourself reading with some anxiety regarding the fate of the people within the pages. For example, Venus Xtravaganza and the fate that befalls her is a plotline I was expecting since I already knew what became of her, however, it did not stop Cassara’s words making the event an emotional moment.

The House of Impossible Beauties, understandably given the topic and genre of the work, covers some very sensitive and heartbreaking topics including; addiction, the HIV/AIDs crisis, the loss of loved ones, sexual assault, domestic abuse, murder, and sex work. Cassara does a good job at not demonizing sex worker and he effectively deals with all the issues within his novel with compassion. He reflects the beautiful and glittering yet harsh world for LGBTQIA+ people but, much like Paris is Burning and the TV series Pose, this novel also highlights the warmth when it comes to friendships, chosen families and love within the community.