Jay Fitger is Professor of Creative Writing and English at Payne University, somewhere in the American mid-West. His days are filled writing letters of recommendation in presumably fruitless attempts to usher his charges into gainful employment, railing against the arcane mysteries of online forms and oiling up his ex-wife and ex-lover.

He strives, manfully at first, and subsequently with increasing desperation, to publicise his most promising student’s work, “Accountant in a Bordello”, a shattering reinterpretation of Herman Melville’s “Bartleby”. Meanwhile, the English Department’s faculty buildings crumble and leak about him (Economics’ are getting renovated, so why not English?). 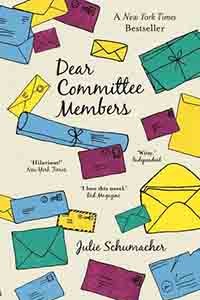 Fitger describes one of his students as having “a mop of blond dreadlocks erupting from the top of his head like the yellow coils of an excess brain” and as one who “has bona fide thoughts and knows how to apportion them into relatively grammatical sentences”. One wonders if Schumacher simply rummaged through her own email archive, changed the names to protect the guilty and arranged them in manuscript form for her editor.

The format drags a tiny bit towards the end of this short to medium length novel, but it remains an enjoyable read and wonderful instruction in how to write a letter.