“Aimed at the young adult yet serving as a perfect reminder to us all that focussing on the positives in life really can bring change.”

Teenage runaway Jessie receives an unexpected package from her mother, containing memorabilia of her father.

Unfortunately a deadly killer named Kabos is searching for a ring that is contained in the package.

Enter the mysterious Finch, who instills magic into everything.

After a message from Finch: there is always an end before a beginning, Jessie loses everything; her job, her band and her trailer. This sets her off on her journey to Memphis. 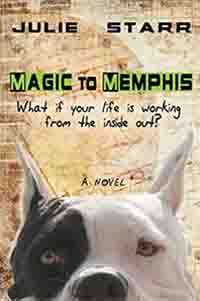 I have to admit that I don’t really read a lot of YA novels and my expectations coming into this book weren’t particularly high. But how wrong I was!

I loved Jessie, she is strong and feisty but she’s also hurt, lost and vulnerable; struggling with her feelings of abandonment. The story follows her journey from filthy trailer park in Dorma to Memphis in search of her father and musical success. Jessie is all alone having left home at sixteen after relations broke down with her mother. Well she’s not quite alone; she has her best friend, Bear, and what a friend he is. A big, ugly pit-bull terrier, born and bred as a fighting dog, but rescued and retired by Jessie. The two are inseparable and he is as big a character as anyone in the book.

The character of Finch was wonderful, guiding Jessie along the way with his magic and ways of teaching Jessie to look at herself differently.

What if your life is working from the inside out?

If only all teenagers had a Finch.

Then there are the members of the band that Jessie is the lead singer in. They all head to Memphis to take part in a music competition that could change all their lives.

Add to the mix the psychopathic killer searching for the ring that is in Jessie’s possession. Kabos is an Egyptian sorcerer who has killed many times and will stop at nothing to get the ring back.

I really enjoyed the descriptions of Memphis. The author brought to life the area and its music really well.

I would recommend this book for all ages. There is enough depth for adults and the easy writing style ensures that it is clear enough for younger readers. It is totally engaging with memorable characters and storylines to keep the pages turning.