“Beautiful tribute from a mother to a daughter.”

This is a story straight from a mother’s broken heart, written following the most horrifying of circumstances that any parent could ever have to deal with. June Steenkamp has written this account of her beautiful daughter’s senseless murder with her emotions pouring out, making you almost drown in sorrow for her plight.

Along with this, she displays an openness and fragility which leaves a reader feeling overwhelmed with a deep sense of compassion, yet also with a profound degree of admiration for her courage and Godly principles. 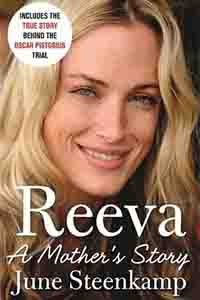 I first started reading this on a plane to Melbourne while on my way to visit my only daughter and five-year-old grandson. I think the fact that I knew I was going to be seeing them very shortly after a few months apart brought the tragedy of this lost life even closer to home. No matter how long it is between visits with my much-loved child, there is always the knowledge that she is alive and only a few hours away by plane, while this poor grieving mother has to live with the knowledge that she will never ever see her beloved daughter again this side of Heaven.

Throughout the book, June is confident they will one day be together again – in fact, I’m sure it is this that gives her strength to keep going – and to forgive the man who brought this horrible circumstance into hers and her husband’s lives. Because, believe it or not, she does forgive him, though she can never ever forget what he did.

Each line has simplistic phrasing – emphasising the fact that this happened to a normal family – one just like yours and mine – and isn’t written with a persuasive tongue to tell a lyrical story, nor edited to the nth degree with the most perfect grammar or imagery. One line has stayed with me and my heart aches with sadness: “I still have her number in my phone. I will never ever delete it.” This is a mother’s heart laid bare, sharing the love for her daughter with you and me, and then taking us on a terrible journey – one that she and Barry, her husband, have endured for the last almost three years.

When I turned the last page, I could only feel deep admiration and profound sadness for everything they have had to endure – not only the loss of their daughter, but also the blow-by-blow minute descriptions in a courtroom of everything that happened on that awful night. Well, everything the perpetrator wanted a Judge to know, although there are still far too many questions left hanging in the air with the rancid stench of unfulfilled injustice.

I may be treading on delicate ground by saying this, but I don’t care … someone has to say what I’m sure many of us have been thinking. For the life of me I cannot understand how someone can deliberately pick up a gun and fire it – not once, not twice, not even three times, but a total of four times – through a locked toilet door and still come away with a sentence which seems more suited to a misdemeanour rather than a cold-blooded murder. Because, in my eyes, this is the only way to describe what happened. Whether Oscar Pistorius knew who was in that small locked cubicle or not, to shoot a total of four bullets deliberately into a confined space clearly shows it was an act set to kill whoever was in there; otherwise one shot should have been sufficient to stop whoever it was in their tracks until the police arrived.

And yet, though June Steenkamp clearly feels the way I do – that this was murder in cold blood – one of the last paragraphs in her book had a profound effect on me and confirms why I admire her so much. “We feel justice has been done. We were happy with the sentence – five years is sufficient. Oscar will spend at least ten months incarcerated and it is right that he should pay for his actions … We went to court hoping that the punishment handed down would fit the crime, and we left satisfied … No sentence can ever provide absolute closure for us. Nothing can – unless someone can magic Reeva back. The man who took her life has to serve his time, but I don’t want him to suffer. The Department of Correctional Services proved they will be able to cater for his special needs, and that was important to us. He will be well looked after.”

It is no wonder Reeva was so admired and loved by all who knew her. Having been raised by a mother with a heart like this proves the calibre of her family, and the person – and mother – Reeva, herself, would have become had she been given the chance.

Rest in peace, sweet girl, and may your family feel you close on those cold, lonely nights … and find many white feathers to bring an assurance you are still with them.

“Reeva – A Mother’s Story” is a tender account of June Steenkamp’s life from the night of 14 February 2013 to the sentencing of her young daughter’s killer – not revengeful in any sense – and something I would recommend for those who are touched by a true story written from the heart.