It is 2019 and an expedition travels to the heart of the Bolivian jungle in search of the secret of eternal life. Well, the expedition has been organised by the Special Weapons division of the US Army, so you can probably start filling in the blanks from here.

The secret of eternal life turns out to be a zombie vampire virus, the test subjects back in the US are condemned criminals, the biohazard containment facility has a fatal flaw (You’d think by now they’d have been able to design a containment facility that works, wouldn’t you? Have these people never seen Jurassic Park?), yada yada yada. 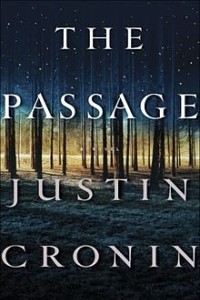 Ninety years on, the last survivors on planet earth are struggling to keep going in the face of zombie attacks, decaying resources and internal conflicts. Their only hope is Amy, an apparently immortal teenager, remnant of the original experiments and key to the survival of the embattled human race.

The Passage has been likened to Stephen King’s The Stand and indeed a less than charitable analysis might suggest that it is a straight rip-off. In fact, there is much more here that will be familiar to a well read King fan and there are also strong resemblances to Firestarter as well as Salem’s Lot, Cell and so-on. However, this is ground that has been well trodden by many a story teller and there’s a goodly helping of Resident Evil, Mad Max 2, The Lord of the Rings and even The Matrix here. I would like to think that Cronin isn’t so much copying King as reimagining The Stand, dosing it with all that is good about the zombie apocalypse genre and bringing it bang up to date.

And he does it well… very well indeed. I would even venture to suggest that he’s improved on King quite considerably. That’s possibly a contentious suggestion but I do believe that Cronin has written a story to rival The Stand. It certainly manages this in terms of its size – it’s a wrist-cracking 1008 pages long – but it is also extremely well written and the pages fly by. True enough, it owes its size to a healthy volume of Kingesque padding but, unlike King, Cronin puts this padding to good use, weaving a complex tapestry of characters, incidental relationships and back-story. It is, by turns, suspenseful, poignant, spooky, philosophical, tense, sweet, unnerving, poetic and even amusing in places. The story is absorbing and while it deserves the reader’s careful attention, it is also easy enough to digest. Perfect it ain’t. As well as being “a bit long”, Cronin does make things rather too easy for his characters with several deus ex machinas. The story gets a bit cheesy and loses some of its pace and bite towards the end but there’s nothing too offensive about these flaws and it remains a cracking read.

I won’t resort to those old cliches about The Passage being unputdownable (it is) or that I read it in one sitting (I didn’t), but, having struggled for some time to find a book that I really wanted to read, I thoroughly enjoyed this from start to finish. You may disagree as to whether this improves on King but I am sure that if you like his work, you will enjoy this. Best of all? Part Two is to be released in October 2012 and I understand that it is intended as a trilogy, so there’s much more to come!

“Special Agent Brad Wolgast hated Texas. He hated everything about it. […] He hated the billboards and the freeways and the faceless subdivisions and the Texas flag, which flew over everything, always as big as a circus tent; he hated the giant pickup trucks everybody drove, no matter that gas was thirteen bucks a gallon and the world was slowly seaming itself to death like a package of peas in a microwave. He hated the boots and the belts and the way people talked, ya’ll this and ya’ll that, as if they spent the day ropin’ and ridin’, not cleaning teeth and selling insurance and doing the books, like people did everywhere.”