“This valuable translation provides many insights into Japanese life. . . . Teruko Craig is to be commended on the vivid picture of this slice of Tokugawa life.”

The samurai have gone down in legend as almost superhuman warriors who knew no fear and valued virtues such as honour, courage, wisdom, and strength to such an extent that they were always ready to take their own life rather than be disgraced.

While this may the case for some samurai, surely there is more to it than that? As high as their ideals were, the samurai were still human, still flawed, so what was day to day life really like for a samurai? 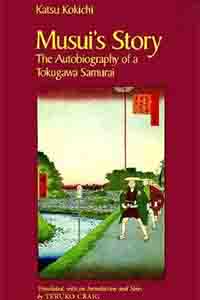 For over 700 years Japan was ruled by the fearsome samurai, who maintained order despite making up only 10% of the population. Many were in service to a specific lord or clan, and would fight their battles against rivals. The samurai have gone down in history as some of the fiercest fighters the world has ever seen and are depicted as not just deadly warriors but also as honourable, scholarly, and adverse to the savagery that is often found in other warrior groups around the world. How much truth is there to this idea? Were all samurai incorruptible men of honour?

In the mid 1800’s, a low ranking samurai decided to write down his life story, not in an effort to celebrate his great feats, but as a warning. In an attempt to encourage his descendants not to be like him, Katsu Kokichi wrote his life story, a story which is far from the idealistic picture often painted of the samurai. Like a roguish character from a fantasy film, Katsu (also known as Musui) was more of a happy go lucky chancer than he was a noble warrior. As an occupation he sold swords and in his spare time he’d lend money, drink too much, visit brothels, get into fights, challenge rivals to sparring sessions, and con people.

As much as the biography was intended to warn future generations from such a path, Musui’s Story is undeniably fun to read. He seems to have found trouble from the time he could walk and it’s only a lot of luck and fast talking which got him out of many of his scrapes. At one point he even declares he will commit Seppuku (a form of ritual suicide) in order to make a certain plan go his way. It was of course a bluff but he may well have been obliged to follow through with the act had things not gone as he planned.

What’s compelling about Musui as a character is that, despite all his flaws, you can’t help but root for him. Though he may lack the strict code of morals some samurai lived by, he was by no means a villain. He seems genuinely fond of his friends and family and is surprisingly understanding of other people’s plights in a society that was often very demanding. Even as he warns the reader not to live a life like his, you can’t help but imagine he may have written with a smirk upon his face as he recalled some of the adventures of his youth.

As someone with an interest in history I find the best books are those which allow the reader to get behind the curtain and see what life was really like for people in any given era of time. The truth is often that people, regardless of their position or circumstances, are people. No doubt many samurai did try to live their life by a strict code of honour, but every now and then there were no doubt a few who were quite happy to spend the day selling swords for more than they’re worth and then blow the money on a night of drinking and gambling at the local brothel.

I also can’t help but feel that Musui had a certain honour of his own kind. As I have said, not only did he never seem like a real villain in life but, upon realising the error of his ways, decided to expose himself as the terrible samurai he was in order to help keep his descendants on the right path. I feel there’s a certain honour in that. It’s also worth noting that his son actually went on to become a very respected and famous samurai in his own right. Perhaps Musui’s warning was indeed one that was heeded. I’d highly recommend Musui’s Story to anyone interested in Japanese history and wants an alternative look at how some samurai truly lived.