Ken Follett - The Pillars of the Earth

“Enormous and brilliant . . . this mammoth tale seems to touch all human emotion – love and hate, loyalty and treachery, hope and despair. This is truly a novel to get lost in.”

Ken Follett has been my go-to author this year and finally I got around to reading his epic which has been popularly hailed as his best work till now. Like his other  historical fiction novels, this one is an eye opener about the era it is set in – 12th century England.

I could write an essay on the fascinating things which I discovered about life in that period but for the sake of brevity, I’ll stick to the most interesting bits. 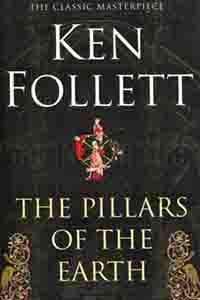 I was literally grinning every time the standard bill of fare was mentioned – Ale beer and bread (for the poor) and meat and wine (for the rich), be it breakfast, lunch or dinner. And alcohol wasn’t consumed for the sake of getting high but simply for survival. The monks produced and distributed it to the entire village (no wonder  the best beer in 21st century is produced by Belgian monks). Infact, my entire perception of what a monk is/was also changed as they were quite different from the stereotype that springs to our mind.

Like Ken Follett himself, I’m not a very religious person nor was I aware about the technicalities involved in church and cathedral building but halfway through the book I was able to grasp what a nave, buttress, crypt, celestory etc. meant without referring to a dictionary owing to the awesome story telling and detailed descriptions.  Tom Builder, the master Builder whose dream was to make the best cathedral in the world (the central theme of the book) is infinitesimally more  practical, believable, lovable, admirable than a Howard Roark. In fact, I liked him so much, that in the end I felt that Follett didn’t do enough justice to this character. But it was clear from the introduction that his Hero in this novel was ‘Prior Phillip’ – a practical man of God (didn’t think it was possible). But the most impactful character was the villain – William Hamleigh. I’ve never ever  hated a fictional character more intensely. He was the proverbial devil incarnate who kept on Raping, looting, killing people throughout the Novel. I was screaming in my head – “Come on this is too much, somebody ought to kill him now” but this was one novel where good was not gonna triumph over evil so easily (in consonance with those tumultuous times). Then, there’s the lovely young Aliena who has made a vow to her dying father that she will reclaim the Earldom from William Hamleigh for her elder brother, Richard.

Her journey from the privileged daughter of an Earl to a destitute and then her struggle to try to live up to her vow gets intertwined with the building of the Cathedral by Tom Builder at Philip’s priory under the shadow of a civil war (Empress Maud vs King Stephen). There are several more important characters in the story but none more than Jack (Tom’s stepson) and Ellen (Jack’s mother).

This is a very special novel, different from all the others written by Ken Follett and should not be missed at any cost and the climax does justice to the build up which took a 1000+ pages.