Ken Liu - The Grace of Kings

A bird of prey wheels in the sky over an Emperor’s procession, a white silken thing that approaches faster and faster, growing in size. Is it a bird, is it a kite…

Ken Liu’s The Grace of Kings is a fantasy epic that recalls the worlds of China and Japan, set as it is  in a land peopled by various tribes all at loggerheads trying to attain the supreme power. The book opens in the best Star Wars traditions with an emperor announcing his power through a grand procession to his conquered hosts, in the middle of which a deadly assassin sweeps out of the sky and almost succeeds in his attempt.

It covers all types of social classes and how people some rise and some fall. 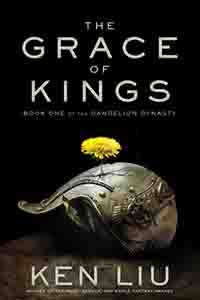 Ken Liu is a student of history – he is curious about why empires rise and fall and the nuts and bolts behind nation states. He is in fact a believer of the saying that those who do not learn from the past are fated to repeat it.  Obviously his is a book of conspiracies and plots, though it also takes in details like the tyranny of taxation in between laying out grand battles.

The Grace of Kings is weighty and takes some time getting off the ground – this is not helped by the blockbuster cast of characters which may confuse the reader.

Emperor Mapidéré brought the island kingdoms of Dara together under the rule his own island, Xana. But 23 years later, the islands want to strike back at the empire. Mapidéré has been struck down, the gods, like their Greek epic counterparts, are frustrated; the counsellors are busy trying to appropriate the next heir while the Emperor’s subjects, fed up by his tyranny and with little to lose are on the verge of rebellion.

Out of the chaos rises Kuni Garu, who has charm, family but doesn’t believe in working, and Mata Zyndu, 8-foot-tall with double-pupils in his eyes who satisfies all the dictates of legend, the last in a long line of warlords crucified by the Emperor. They meet each other by chance and form an unlikely alliance which threatens to break the Empire’s back. However, what follows is confusing and the stakes for which they play keep changing.

The world that Liu creates is fierce and diverse; a world where the warring states of Dara are drawn from multiple references, myths and influences. Myth is in fact its field since the story’s battlefields have an epic architecture. Mata and Kuni belong to two different traditions, folk and literary and the game is to see which tradition will finally dominate the story.

If all the characters were male there would be no problem, but against this backdrop, an issue arises with the women characters.  The heroines in The Grace of Kings are figures trapped in the roles that their men set out for them, unable, despite their wisdom, to break out and create a new world order. Kuni’s wife is apocryphal but barring her choices in marriage and her skill with herbs still remains an adjunct to her husband’s power.

The last third of the book sets the field for a sequel; Liu builds up the drama with reversals of fortune and implies that there is another dynasty in the making – fantastically named Dandelion Dynasty which is blowing in the wind.  Certainly this is a doorstop fantasy novel that lovers of the genre will lap up.