“A lovingly written tale of close encounters, some beautiful and some frightening, with humans and nonhumans alike.”

The author is a South African conservationist, working for the cause of preservation of wildlife in Africa, and also ensuring the rights and traditions of the Zulu people are upheld.

The Elephant Whisperer is about how he introduced a herd of wild elephants into his game reserve. The purpose of game reserves is to protect wild animals from hunting and poaching.

The reserves are spread out in South Africa, such that they connect with each other. The animals are all wild, and they roam within these reserves, and the owners and rangers of each of the reserves keep a watch for any activities that would hamper the wildlife. 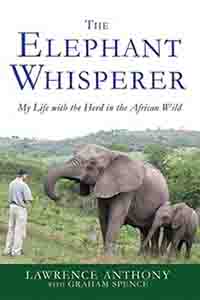 The author is asked to take in a herd of 7 wild elephants to his Thula Thula reserve in Zululand. No other reserve wants them, since 2 from the herd (of originally 9) have been shot, the leader and her baby, and the rest of them have gone truly wild and uncontrollable. And if they are not within any reserve they are at risk of being poached.

Ultimately, the author takes in the remaining 7 elephants. The book is spread out over a period of 8 years, and shows the bond between the author and his herd.

There are hilarious moments like the author naming each one of them based on their characteristics (going to the extent of naming one elephant after his wife on account of her being temperamental and unpredictable). Heartbreaking moments – Elephants are matriarchal. When the young males reach adolescence, they are ignored, neglected and finally pushed out of the group. The sole male in the herd found more companionship in humans than with his own herd. But that’s nature’s way of preventing inbreeding.

Sad facts – another herd has been shot, and the sole survivor sold to a trophy hunter. (The author intervenes and brings her to his herd). New learnings about life in the bush – A mere scratch from the fang of a Black Mamba snake can send a human to the ICU. The author puts forth a very honest account throughout. For instance, an “aggressive” male being put down, only to find out he had a rotten tusk which had made him irritable.

The book is all about little known aspects of elephant behavior and intelligence, while providing a good account of life in the bush in general. The book portrays how remarkable these animals are and is a delight to read, not just for animal lovers.

(P.S. When the author passed away in 2012, his reserve had 2 herds by then. The elephants loitered around his house for 2 days, mourning his death. (Unheard of among wild elephants.))