“One of the best-known experimental novels of the 1960s.”

Leonard Cohen is a man of many talents. I consider him the greatest songwriter (second only to Dylan) in the world, an amazing and thought provoking poet and accomplished artist. The man oozes charisma and intelligence from every pore and attending his live concerts ranks amongst some of the best moments of my life. However, Cohen is less known as a novelist and has published two novels (My Favourite Game & Beautiful Losers) very early on in his career.

I first discovered Beautiful losers around 10 years ago and after sitting there for over a hour I couldn’t even get through the first 30 pages. It was then placed to one side and forgotten about. I have always wished that I had persevered as I was sure that I was missing something. With this in mind I picked it up again and settled down for a read. 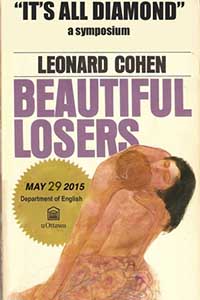 The novel is split into 3 parts, the first part is told through the eyes of an anonymous narrator and details his bizarre relationship with his wife (Edith) and best friend (‘F’), interwoven into this is the story of Catherine Tekakwitha a 17th Century Saint. As the narrator recounts past events (whether real or imagined we are never totally sure) it becomes apparent that out of the group he is the only one left alive. All sounds a little bizarre? That’s because it is. Although the previous sentence may indicate that there is some sort of plot to the novel you would be extremely hard pressed to find one. What about themes I hear you ask? Well for me the only really apparent theme was that of sex. Graphic descriptions on practically every page (I am sure that this book must hold some sort of record for using the c*** word) that would give even Richard Laymon a run for his money. I am no prude and this sort of thing really doesn’t bother me in the slightest, but it just gets very tiresome after the first 100 or so times. I understand that this was written in 1966 during the ‘sexual revolution’ and maybe this had some sort of influence on Cohen, although he has admitted himself that it was produced under the influence of ‘fasting and amphetamines’.

The second part of the book follows much the same as the first, only this is written in the form of a letter to the narrator. The 3rd part is much briefer and I really hoped for some kind of epiphany moment whereby I would put my finger in the air and declare ‘So this is what it was all about!’, it never happened.

However, despite all the various illogical ramblings there are some moments of brilliance to be found within the pages. We all know the wit and insight that Cohen is capable of and it is well worth wading through the endless nonsense to find such highlights as:

“What is most original in a man’s nature is often that which is most desperate. Thus new systems are forced on the world by men who simply cannot bear the pain of living with what is.”

But unfortunately these are accompanied by such drivel as:

I keep wanting to enjpy the book and really tried to love it. It appears on Amazon that a number of people do, but an almost equal number don’t. Maybe I will revisit it one day in the future again and once more hope for the ‘epiphany’ moment. But I wonder if this was uncredited work how many of those raving reviews would remain?