“Hilsum brilliantly synthesizes it all, separating wheat from chaff and building a portrait of a remarkable and somewhat troubled woman.”

The celebrated war correspondent Marie Colvin was described in many different ways by many different people. To almost all who met her or knew of her work, she was courageous, inspirational, driven and dedicated – a dedication which, arguably, cost her her life in Homs, Syria in 2012. To those who were put in charge of her and her work – her parents, teachers, editors – she was rebellious, a force of nature who “trailed pandemonium and glory”, who knew her own mind and followed it.

To those who were privileged enough to be in her social circle, she was the life of the party, glittering and glamorous and always up for a laugh. And to those friends and family who were closest to her, she was loyal and caring, but also vulnerable, self-obsessed, and with a yearning for security. She was, quite simply, a brilliantly flawed human being. 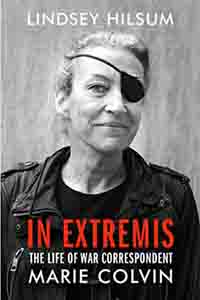 In this biography, her friend and colleague Lindsey Hilsum manages to weave the threads of Marie’s complex character together to form a vivid portrait of the woman behind the byline. What could have easily become a hagiography – such is Marie’s status in the world of journalism – is instead sympathetic and realistic. Marie was brilliant, but she could also be difficult. She drank to excess, defied editorial demands, and was notorious for ditching photographers who she deemed not up to the job. Later, after losing an eye in Sri Lanka and seeing more war than most career soldiers, PTSD and alcoholism made her behaviour even more erratic. By her own admission, she was full of contradictions. Here was a woman who saw the need to ask “what is bravery and what is bravado?” and yet never curbed her own drive to go in further and stay for longer. On a personal level, she loved children and wanted her own enough to undergo IVF, and yet was compelled to live a lifestyle that made children realistically impossible. She longed for the stability and familiarity of a successful relationship (she was married three times, twice to fellow journalist Patrick Bishop and once to Brazilian Juan Carlos Gamucio), and yet, in her own words, she was “always pacing, testing the strength of the confining bars” and the patience of those who loved her. All three of her marriages ended in divorce. Hilsum manages to deal with all of this with grace and style, much like Marie herself, and asks those all-important questions that Marie’s life raises: how far is too far? What service do war correspondents perform? What morals govern a life lived on the battlefield? What level of professional and personal risk is worth the story? The answers are not always clear.

Marie, like her hero Martha Gellhorn, reported not on the political and mechanical aspects of warfare, but on the personal and human cost. She distrusted “all that objectivity shit”, and instead wrote unapologetically of the suffering of the people on the ground. She told individual stories. She made it clear in her writing that she had been there, and seen it with her own eyes (she was one of the first reporters to inject the first person into her work). The only distinction she made was between right and wrong, saying that “When you’re physically uncovering graves in Kosovo, I don’t think there are two sides to the story. To me there is a right and a wrong, a morality, and if I don’t report that, I don’t see the reason for being there”. She was not fearless, but overcame her fear in order to do whatever was necessary to tell the story. She brought detail into the big picture, and she believed that journalism could make a difference. It was a belief that, when combined with her natural competitiveness and empathy for the underdog, led her into often reckless and dangerous situations. Her death in Homs, then, seems both inevitable and unnecessary: unnecessary because she could have escaped, but inevitable because this was Marie and leaving, when hundreds of others were trapped and did not have that option, was impossible.

A poignant quote was read at Marie’s funeral by her close friend Jane Wellesley, that seems both appropriate and heartrending for a full life cut short: “As for me, my life is already being poured as a libation, and the time has come for me to be gone.” A less elegant quote comes from Marie’s own journal, aged 14. For me, as a reader who knew nothing about Marie beyond her Sunday Times journalism, it sums up the rebellious girl and the courageous, inspirational woman she would become, the woman who defied the boundaries and set her own agenda despite the cost. “Went to church. Wore mini. The mother and the father no like.”