“A very funny and endearing book. Highly recommend it.”

Who hasn’t walked into someone’s house and thought “Ugg! Why did you use a blind decorator?”? But there aren’t many of us that would do anything about it. Hey, if they want to live surrounded by a plaid red and green couch with purple polka-dot wallpaper, that’s their problem.

Not in Morning Shade! Someone is this little town is breaking into homes and redecorating. They aren’t stealing anything. They are adding items, rearranging furniture, and packing away offending nick-knacks.

This is listed as Christian Inspirational. Every so often it does get a little preachy but it is the same thing over and over. 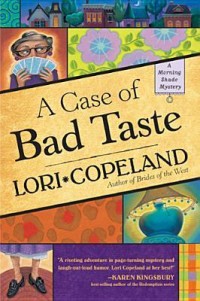 MK Diamond is a frustrated Christian author. Stuck for her next book she begins to rely on the goings-on of her little town for a plot for her next book. Mostly the preachy parts come in the form of MK throwing herself a woe-is-me pity party.

I’ll save you some time. Skip the first disc. Here is all that takes place on the first disc…
MK has writer’s block
She has never made the Best Seller List
Poor MK
She is a widow
Her daughter is newly widowed
Her mother-in-law must come to live with her because of finances
Poor MK
Her daughter is coming back home to live to adjust after losing her husband
Oh, why does everything happen to poor MK?

For a book touted as a Christian book there is an awful lot of self pity. She drones on and on about how horrible everything is for her. Forget that everyone else has been uprooted and had to move into someone else’s home. God should help her write this book. God should give her ideas worthy of the Best Seller List because that is her dream. God should just write the book for her. OK, I made that last one up but that’s what it seemed she wanted.

Once you get past the pity party you have to deal with the plot. It is predictable and not much of a mystery at all. The culprit is practically dangled in front of you several times throughout the book.

The characters were well developed. The only problem was that out of the three main characters only one of them isn’t a cry baby. I’ve already told about MK’s miseries. Then there is the daughter. Don’t get me wrong. Anyone that loses a spouse deserves a period of time in which to dwell on the dark days ahead. But I’d had enough of that already with MK.

If you’re looking for a book that won’t require too much brain power to finish, pick this one up. Take it to the beach or the pool and then leave it there when you’re done.

I didn’t totally hate this book. I think the mother-in-law saved it for me. If I run across the rest of this series (this is #1) I may pick them up just to see what she gets herself into next.

Because of its predictability and whiny main character I can pretty much guarantee I won’t reread this one. I’m giving it a 2.75 on my bookometer.