“A brilliantly funny, scary, sweeping novel with all the energy of Welsh’s debut.”

The title of the book is perhaps one of the biggest debates of the last decade. Messi and Ronaldo are not just mere footballers, but arguably the best two humans(many doubt if they are human actually) to ever play the game, global icons, most marketable and recognisable faces on the planet.

They rewrite the record books almost everyday and we are privileged to be born in this era to watch these two geniuses who continue to set new standards and prove that age is just a number.

If you do a purely objective analysis and put them head to head, then both are comparatively better at some particular aspects than the other. 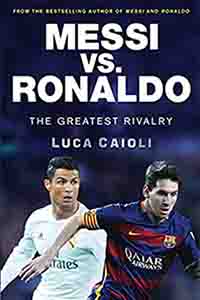 Messi, I believe is much better in passing, slightly better at dribbling and is better while playing through the middle and I think he will transform into a Central Midfielder in the last stages of his career seamlessly. Ronaldo on the other hand, owing to his incredible physique and height, is much better in the air, can shoot better with his weak foot, and is maybe a trifle faster. Messi has spent all his life at Barcelona who enrolled him in their academy as a kid while Ronaldo started his senior career at Sporting Lisbon, before his record moves to Manchester United and Real Madrid. What makes this rivalry the most fascinating and hotly debated is that not only are they the two finest footballers  but they happen to be playing at the same time. All the previous debates involving Pele, Maradona, Platini, etc were purely academic as these players were the best in the world at different times.

Now while most people are neutral on giving a verdict, many experts have given their frank opinion on who is better. I personally like Ronaldo just a little more while most people I know prefer Messi (seeing Messi play last night against JUVENTUS had me thinking again actually). Let’s just hope that they keep defying age and keep pushing each other to entertain the world for another few years.

The book is very well written, similar to his other books which I’ve read – Ronaldo, Messi.