“The story of Hamnet Shakespeare has been waiting in the shadows for over four hundred years. Maggie O’Farrell brings it dazzlingly, devastatingly, into the light.”

Just finished Hamnet by Maggie O’Farrell. This is a novel about the immediate family of William Shakespeare.
We read about how he met his wife Agnes, his problems with his father John, and his three children, Susanna, Judith and his son Hamnet.
John is a glovemakes and a abusive father. Agnes lives in a nearby farm. She is a person of the woods, a sort of psychic and a healer. She has a pet Kestral which she flies in the woods. She is very independent, but when she meets Will, she immediately knows that he is the man for her.
Once they marry the story turns between the children being born and raised and the future with Will living in London as a play writer. 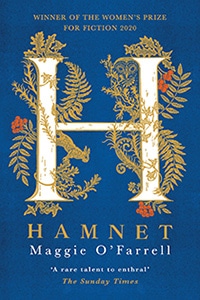 It also gives us a realistic look at life in the late 16th century, where death can come quickly, and so many children do not live into adulthood
Will and Agnes will share their dreams and their nightmares, their search for their own financial independence, but most of all, when they will all be able to live again under one roof.
Unfortunately, life always throws us a curve and this family has their fair share of them
A brilliant book that brings this period of life into sharp focus, another one of the best books of the year. Highly reccomended.