“A taut thriller, a psychological study, a play on words.…A rich and complex book.”

Margaret Atwood, inspired by both parts of history and contemporary issues of the 1980s including Nazi Germany and conservative revival in the West, thrusts her protagonist, Offred, into a hellish future where women’s rights have been entirely reversed. In this eerily plausible dystopia women have been utterly objectified into nothing more than baby makers due to the dangerously low population rate. They have a single function; to reproduce for infertile women of higher status. The Handmaid’s Tale is made all the more terrifying when considering how Atwood stated that nothing that occurs in the novel has not happened before at some point in history.

Atwood’s dystopia is thick with rituals which twist religion, degrade women and disturb the reader. One factors that makes The Handmaid’s Tale so brilliantly disturbing is that, alike countless dystopian novels,’ it modifies sex into merely a necessary task to sustain the population. 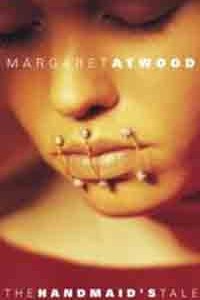 However, ‘The Ceremony’ still involves humans and the actual act of sex. It wholly rids sex of emotion and de-humanises it to a heartless act but still involves people- three people; the husband, the wife… and the handmaid. ‘The Salvaging,’ (a twist on the religious word ‘salvation’) which involves a hoard of repressed woman being authorized to take their anger out on one man who has broken one of the numerous laws of ‘Gilead’ (the state), is equally as horrific.

Frequent references are made to the past as Offred immerses herself in her memories with her former husband, Luke, which effectively reminds the reader that this woman was, once, an ordinary woman, making the entire novel even more alarming. This offers a brilliant contrast to the bleak world which is Offred’s reality as she recalls, ‘How were we to know we were happy?’ Thus; Atwood successfully puts a mirror to her current own with its shallow values and its attitudes of constantly desiring more.

The novel ends with what could be considered as somewhat of an anti-climax. Had Atwood chosen to end it earlier, it would have been more effective. The glimmer of hope implied by the ending, even if minute, does not stay true to the harsh, brutal nature of the dystopia. Nonetheless, The Handmaid’s Tale displays Atwood’s incredible mind in both underpinning her writing with thought provoking ideas and in the way it is reads – every word’s a gem.

I’m a huge fan of dystopian novels, as regular readers of our page will know, and so was delighted when my daughter asked me to recommend one for her English Literature A Level course. I recommended Huxley’s Brave New World and in return she gave me The Handmaid’s Tale, a novel by Margaret Atwood based in the American society of Gilead.

This chilling tale really doesn’t deserve to be in the science-fiction genre. With every page I was reminded of many atrocities against women around the world, and how for many cultures, women are as invisible as they are in Atwood’s chilling tale.

I don’t really enjoy talking politics with my reading addicts, I’d rather now know which way you sway as I love the relationship with books we all share. However, it’s impossible to talk about The Handmaid’s Tale and not mention politics as this is a fiercely political novel and a scary portrayal of what the future might bring.

It’s difficult to read and not fall right in, imagine how wrong you might feel in the world and how you might use such tiny things to survive. The mantra ‘Nolite te bastardes carborundorum’ has never been so appropriate and I found myself willing a revolution of some kind.

I really, really loved The Handmaid’s Tale, from the first word, to the final drop into eternal suspense and it took me at least a week to get over reading it. If you’re a fan of dystopia, add this one to your reading list.