“Sexton takes on [Toni Morrison’s artful invocation of the ghost] in her new novel The Revisioners. . . She writes with such a clear sense of place and time that each of these intermingled stories feels essential and dramatic in its own way.”

Just finished The Revisioners by Margaret Wilkerson Sexton.  This novel is the story of Josephine.  We follow her as a child into slavery in 1855, as a free adult with her family that owns its own little farm in 1924 and through the eyes of a descendent, Ava, a now single parent who was in a biracial relationship and had a small son from that relationship, in 2017.

The stories alternate back and forth   The slave years tells  about Josephine and her mom and dad working on a plantation and how they and the other slaves have a plan to escape to go North to freedom. 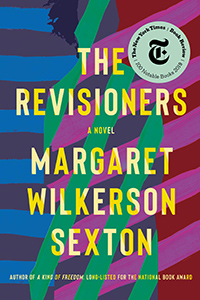 As an Adult, Josephine is an important member of the community as a woman who can help heal and also can deliver a baby   Her problems begin when a white couple move next door and the wife named Charlotte comes over to introduce herself and she wants to be friends.   Josephine knows little good can come from this.

The last story is about Ava who has a son who is black.   She is moving in with her white grandmother who is named Martha who is beginning to go downhill health wise.  At first things go fine but then there are the times when true feelings come out and problems begin.

Following this family is a fascinating read and the problems that follow them are those that have existed for so many years in the black community.

An epic story in 276 pages it is an excellent narrative that keeps the story moving along at a comfortable page.  An important novel, highly recommended.