Masaji Ishikawa - A River in Darkness

“A terrifying true story of life in North Korea…Told in simple prose, this is a shocking and devastating tale of a country’s utter contempt for its citizens”

A terrifying, gut-wrenching, true story of life in North Korea. This book left me wondering about the madness and atrocities this world is still full of.
It is a memoir about the life journey of Masaji Ishikawa, who managed to escape the hell hole that is North Korea.

Ishikawa was born in Japan in 1947 to a Korean father and Japanese mother. From his youngest days, he was taught that North Korea’s Kim Il sung was an “invincible general made of steel.” 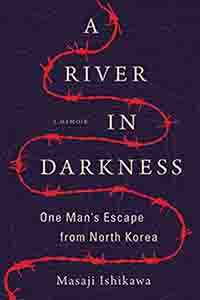 During that time, North Korea relied heavily upon propaganda to appeal to Koreans living all over the world to come and live in “the paradise on Earth”.
In 1960, since his father wasn’t doing well in Japan, they succumbed to the propaganda and decided to shift to North Korea where it was promised that they will be given a free house, free education and many more incentives. Ishikawa and his family settled in the North Korean village of Dong Chong-ri. And then they realised what a big mistake it was.
What follows is a horrifying and an extremely graphic account of his life in North Korea.

Everyone had to join the Worker’s Party and pledge allegiance to Kim. Thoughts were not free, and no one could question Kim. Working on a farm as part of the Youth League, he soon learned that the only cause of any failure was a total lack of respect for Kim and the party. Everyone was brainwashed. He being Japanese, the lowest of the low, was shunned to the very bottom of society.
Food was taken away from them, and old people worked until they died. Poor workers went to concentration camps or were executed.
He eventually got married and had kids. He lost his parents due to the hardships. His family suffered horribly, reduced to eating weeds and tree bark. It was even worse after Kim Jong il became leader.
After 36 years and in utter despair, he risked his life and, in darkness, crossed the Yalu River into China. He hoped to work in Japan and send money to his family, but by then, he was Korean, and the transition was extremely difficult.

Told in simple language, this is a shocking story of a country’s brutality towards its citizens. Stark and gory, it is an eye-opening and informative read. To even think that such a place still exists in the 21st-century is sufficient to give anyone a nightmare.
It’s been 23 years since he devised his own escape, however the chances of rescuing his remaining family, who were stuck then in North Korea, remain slim. Who knows if they are even alive?