“A heart-breaking account of a young man experiencing debilitating depression but comes with a surprising light touch.”

It is estimated that one in four people in the UK alone will experience mental health issues every year. Every year in the United States, 26% of adults suffer from a diagnosable mental health issue and over 800,000 people across the globe commit suicide. Suicide has become the15th leading cause of death and more people die by their own hand than the combined total of people who are murdered, die in traffic accidents, or are killed by animals.

In this modern age, many ailments which would have resulted in death for our ancestors can easily be cured with a few pills, an operation, or simple changes to our lifestyles. It’s certainly true that, whilst there’s still a ways to go, when it comes to our physical health we have it better now than humans have ever had it before. But what about mental health? 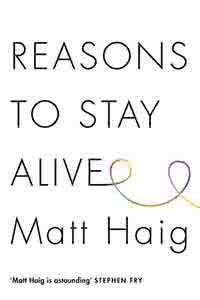 In the past mental health has been highly stigmatized from accusing those of being afflicted of being possessed by evil spirits to locking up suffers in asylums little better than prisons. We’ve certainly come a long way since then but the fact remains that mental health is still not as well understood as physical ailments. It’s easy to identify and feel sympathy for a person with a broken leg, but someone with a mental illness can often show no obvious signs of being unwell and it can be hard for others to be sympathetic towards a person who’s pain doesn’t physically show. Illnesses like depression feel scary and mysterious to the average person and, despite our best efforts, there is still a certain stigma attached. However, don’t despair just yet. We are going in the right direction and it is thanks to books like Reasons to Stay Alive that we are becoming more aware, accepting, and understanding of mental illness than ever before.

Originally released back in 2015, Reasons to Stay Alive has struck a massive chord and has (rightfully so) been hugely successful. My copy of the book contains numerous quotes from notable personalities who shower it with praise. Stephen Fry says of the author “Matt Haig is astounding”, Joanna Lumley calls it “A small masterpiece that might even save lives”, Rev. Richard Coles writes “Brilliant…it should be on prescription.” Inside are quotes from Twitter readers. @sarabran says of the book “Thanks @matthaig1 for this beauty of a book. A book I wish I’d had at 15, 29, 40, and next week.” It certainly seems this book has made waves among those who’ve read it. When I saw what a response it was getting I had to check it out for myself.

It wasn’t just idle curiosity that had my interest. Like millions of people I have personally struggled with depression and anxiety and I also have friends who have experienced mental illness and still do. One of the reasons mental health can be so frustrating is that it’s different for everyone. What works for one person may not be any use to another and one person’s experience may be entirely different to someone else’s. It’s always important for books like these not to promise readers that they’ve got some kind of magical cure. I have to admit I did have a little scepticism in the back of my head.

The Author, Matt Haig, fully admits that even he’s not sure exactly what genre this book would fit into. It certainly has some great tips for staying afloat when you’re at your worst, but neither I nor he would call it a self help book. It’s essentially his story of overcoming his depression and anxiety but it’s not a simple memoir either. Perhaps a mix of the two? The book opens with Haig recalling the day that he became, for no specific reason, incredibly depressed and anxious. On the surface things seemed fine. He was a 24-year-old working in Ibiza in the late 90’s with his girlfriend and spending free time drinking and partying. What started as a thought snowballed into panic and depression. Spending days in bed, Matt eventually got out of bed and walked to a nearby cliff and spent the next few moments contemplating jumping off. Luckily, Matt didn’t jump and returned home to London where he then spent years working on his recovery.

Not only does the book follow Matt’s long and hard road to recovery but the author also shares with us his thoughts on depression both as he felt them then and as he does now. The book includes several conversations between himself then and his happier self now as he tries his best to convince his suffering self that things will get better, the pain will pass, and that the best is yet to come. This is perhaps one of the most important parts of the book, at least to my mind, as it offers one of the best weapons for fighting depression; hope. When one is in the pit of despair, suicide can look like the only way out because the person suffering can’t possibly believe that things will get better but, as Matt shows us, they can and they do.

The book also highlights the awkward fact that, for those living with people with depression, it can be very tough. When people are in pain, they are often difficult to be around. It can be difficult for loved ones to understand a sufferer’s illness when they’re physically perfectly healthy, It can also be difficult because people in pain can be bitter, argumentative, and mean. This is often easier to understand when you can see a person’s pain. It’s easy to forgive a person with a broken leg for snapping at you but much harder when your partner, friend, or relative’s pain is in their head. This is certainly a book that will help those who don’t personally suffer with mental illness but who know someone that does. There’s an entire chapter entitled “How to be there for someone with depression or anxiety.”

Another aspect in which the book excels is the fact that it helps to take the mystery away from depression. As Matt explains, a mental illness is often thought to be a physiological ailment, but it often includes many unpleasant physical symptoms. Shaking hands, nausea, over-eating, under-eating, and insomnia to name but a few. These added symptoms can all be equally scary in their own right but, as the book says, these are by-products of depression and, whilst unpleasant, not deadly. Depression feels so isolating and scary to those suffering from it but, as I read this book, I often found points which I related to. Anyone suffering from the illness will no doubt feel a little reassured that such symptoms are common and that they’re not the only ones who suddenly need the toilet or start sweating buckets when panic strikes. The book also helps suffers to feel less alone by listing many well-known people both today and from history who have suffered from depression and anxiety. People like Buzz Aldrin, Winston Churchill, Zach Braff, Halle Berry, Stephen Fry, Anna Hathaway, Stephen King, Abraham Lincoln, Mozart, Teddy Roosevelt, Emma Thompson, and Catherine Zeta-Jones, to name but a few, have all struggled with mental illness and have all gone on to lead fulfilling lives. It’s comforting to know you’re in such good company!

The book ends with Haig reflecting on the things he now realises help his depression and those that make it worse. As he explains, once you’ve come to grips with your illness, you begin to see that its attacks aren’t random, they’re often triggered by things you may not have noticed at first. Haig cites things like lack of sleep, coffee, and social media (sometimes) as things that can put him on edge.

He also states that things like exercise, eating well, music, long walks, and social media (sometimes) help bring him back up. Haig has since married his girlfriend, has two children, has published several successful books, and has now written a critically acclaimed book about his experiences with mental illness. Do you think he could have believed he was capable of any of that when he was stood on the edge of the cliff?

I fully agree that Reasons to Stay Alive is every bit worthy of the high praise it has been given. This short and easy to read book is essential for anyone experiencing depression or anxiety in one form or another. It will undoubtedly give at least a glimmer of hope to those feeling overwhelmed and, as Joanna Lumley said, may well save lives.