“There is nowhere else…You will only tread a circle, Titus Groan. There’s not a road, not a track, but it will lead you home. For everything comes to Gormenghast..”

These words, spoken by Countess Gertrude, near the end, sum up the appeal of Gormenghast the book. Reading Gormenghast one feels that it is a world complete of itself, that has not only always been there, but will always be there. The cast will change, but the story lives on. A Mousetrap in more than one sense. However, this immortality is far from giving the reader, and some of the characters, feelings of contentment. The apparent fact that there is nowhere else, that there is no escape, is stifling. Gormenghast the book almost absorbs the reader into itself, just as Gormenghast the castle has absorbed the souls of its inhabitants. There is nowhere outside of Gormenghast. 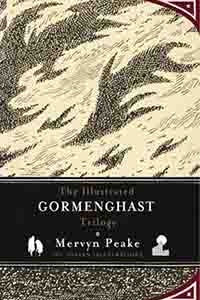 Gormenghast is the second in Mervyn Peake’s trilogy. It begins a few years after the end of book one, at the time when Titus Groan is eight years old, and expected to take a greater role in the life of the huge monster of a castle that is his home. It ends with Titus as a seventeen year old, forced to make momentous decisions about his future.

The cast of characters is familiar from Titus Groan, though now some appear only as shadows, as ghosts. There are new characters such as the Professors, some are rather unpleasant, some very unpleasant and few likeable. Gormenghast is a place that seems to struggle with likeable. Eccentric it copes with, weird is almost the new normal, and the downright nasty is commonplace.

In Titus Groan, the first book, the lives of the main characters spun round rapidly in a complex, but ordered fashion, almost Busby Berkleyish in its choreography. However, in Gormenghast the pace slackens, is less frenetic, and more time is allowed for the reader to consider the relevance of the various subplots. Eventually, all of the subplots merge into a single, momentous event, a crescendo of such intensity that it is almost impossible to put the book down until you discover how the end will be. The last chapters are definitely page turners.

The most important character is, as in Titus Groan, the castle itself. It is the focus of events. It is the dominant feature in the lives of everyone, whether they live within or without its walls. It gives life and purpose to its inhabitants, whilst at the same time sucking the life force from those people. There is almost a symbiotic relationship. The people cannot imagine life without Gormenghast, and Gormenghast cannot exist without its inhabitants. Such is the overwhelming size of the castle, it takes Steerpike an hour of swift walking to get from the central habitable areas to a remote set of rooms. In another part of the book a character walks for over a mile in one, relatively small, uninhabited region of the Castle. It is a behemoth of prehistoric proportions, Gormenghast dwarfs its inhabitants to the point that they are like viruses on a dinosaur.

There are several subplots, performing a slow, measured choreography. If the story of Titus Groan is a tarantela, Gormenghast is more of a minuet. One scene can spread over several chapters, giving the reader time to consider where the events are going. These events are allowed time to mature, to reveal more of their complexity. Suddenly though, we can be whisked off to another part of the labyrinthine castle, to witness the events of a completely different subplot. Peake does not allow us to rest for long.

The interaction between the different characters draws on a number of different aspects of the human psyche. Fuchsia Groan is coming to terms, belatedly, with the angst of leaving childhood and becoming an adult. Titus Groan, still a child, begins to push the boundaries, testing himself and his relationship with adults, and with Gormenghast. Irma Prunesqualor, she of the white skin, and little else to commend her, examines her lack of success in the use of her womanly wiles, and then puts them to better use. Steerpike continues to represent the dark underbelly of the human psyche. Still disliked, sometimes feared, often despised, he demonstrates, possibly, how each of us might be if we chose to ignore the small voice of our conscience, how easy it is to lose the veneer of civilisation. Bellgrove, one of the Professors, is one of the few likeable characters. Despite his faults, he is a sympathetic character who struggles to cope in a world with which he has little in common. He is a man who wants to be recognised for what he is, but who has little idea how to achieve that end. Consequently, his behaviour swings from one extreme to another as he tries to accommodate the different demands made upon him by an unsympathetic world. In this, he is possibly the one character that it is easy to relate to. His experiences are so much like our own, where we try to balance the public and the private persona. Another sympathetic character is Dr Prunesqualor, who is struggling to piece together the facts that become visible about the life of Gormenghast. Too self absorbed to be truly likeable, Prunesqualor is often that much maligned adjective, nice, and in him we can recognise much of our own struggle to understand the wider world.

Despite, or perhaps because of, the frailties of the inhabitants, Gormenghast retains its dominance over all. It may be decaying. Walls may crumble. Roofs may collapse. Yet through it all, it remains strong. However, the shadows seem darker than before, and the decay more extensive. Several characters are aware that there is change in the air. Change is never good in tradition bound Gormenghast, but this is worse. The word evil is bring used, but no one knows what form it takes.

As with Titus Groan, Gormenghast is not an easy read. It requires effort, but that effort is amply rewarded. Full of obscure words and phrases, this no longer annoys, but adds to the sense that Gormenghast is both other worldly and of this world.

At times a page turner, the book can also set the reader off on a chain of thought that necessitates putting the book to one side. At the end, without doubt, there will be more thought, possibly some dark thoughts about human nature. I have spent some time considering how like I am to some of the characters and although most of the answers that I came up with were, if not flattering, then certainly not worrying, I am not so sure about all of them. Am I, in fact, better than Steerpike? How would I cope faced with temptation? I hope I am better. This is not a book that leaves the reader unscathed. There will be questions.

Gormenghast is not a book that answers questions though. In fact, it raises the questions and the answers must come from the reader. As such, the meaning of this complex book varies according to the reader. There is certainly no right or wrong answer as to what Mervyn Peake was trying to tell us, if indeed he was doing so. I suspect that, in fact, Peake was testing us, getting us to find our own response to the book.

This is an excellent read that makes you want to reach, straight away, for book #3 in the trilogy. Which is just what I shall do.