“Peake’s books are actual additions to life; they give, like certain rare dreams, sensations we never had before.” 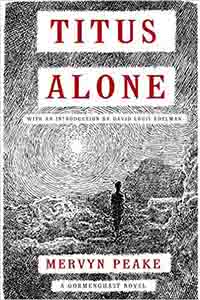 A short way into book three of the Gormenghast trilogy appears this conversation. A short way, but already Chapter Eleven of Titus Alone. Two characters confused by the same fact, but for different reasons, where is Gormenghast?

The huge, monstrous edifice that is Gormenghast was central to the events in Titus Groan and in the book Gormenghast. It’s crumbling towers and roofscapes dominated even when still recovering from the disastrous flood that almost wiped it out. Yet now, in Titus Alone, it is a ghost.

The first thing that you notice about Titus Alone is its size. A far shorter book than its predecessors. As you begin reading, Mervyn Peake’s inimitable style reaches out to welcome you. Familiar territory. However, within a few paragraphs you realise this is not somewhere that you recognise. The prose is disjointed. In the earlier books, once you had accepted the use of obscure words, there is a distinct rhythm about Peake’s writing. In some ways, he creates a dreamlike atmosphere for Gormenghast. It’s a Medieval fantasy. There is a Pre-Rafaelite feel to Gormenghast, it’s towers, although in ruins, have much in common with St Pancras railway station. Fuchsia could have been a painting by Dante Gabriel Rossetti come to life.

Gormenghast is the world, almost a universe, if we are to believe Countess Gertrude when she cries out “There is nowhere else…”, yet leaving it Titus leaves a Victorian vision of the medieval period and enters a modern city. Peake’s lyrical style, which is as important in the creation of Gormenghast as the nouns and adjectives that he chooses, has disappeared. In its place is a more staccato style. Cruder. Shorter sentences. It is, without doubt, a reflection of what Mervyn Peake was struggling with at the time. He was battling illness, and it was a losing battle. Dreamlike, even in its darkest moments, Gormenghast is replaced by an almost nightmarish world that is old, yet new. Reviewers have likened the place that Titus finds himself to a modern city, but it is not modern as we know it. More like one of those predictions about life fifty years ahead, all shiny clothes and glass, and, well you get the idea.

How Titus arrives in this place is only hinted at, but the journey was not an easy one. Gone is his horse, he travels by water. It’s not even his first port of call. He arrives ragged, exhausted and hungry. A true mendicant, though probably an unsuccessful one. The arrogance that Titus gained at the end of Gormenghast, the book, is still with him. It is largely internalised, in thoughts rather than words. These flashes of Earl Titus would have made it difficult, if not impossible to beg.

A new world full of new characters greets the reader. We meet an old man who seems to be a significant character, but after a few sentences he is gone. Peake has lifted our expectations, but then stamped on them. Police like characters appear, the Helmeteers, in pairs, both before and after the meeting with the old man. Although vaguely described, we are reminded of Cora and Clarise, but as soon as that thought enters our head it is snatched away. Peake is playing with us as if we are the trout of his fly fishing. Into this confusion steps, or rather, drives, Muzzlehatch, a character filled with Peakean weirdness. Titus becomes the protege of Muzzlehatch, who tries to protect him from the Scientists, from the Helmeteers, who constantly reappear strengthening memories of Cora and Clarise, and from, it seems, the world in general.

There are several other major characters whose influence on Titus is significant, for better or worse is actually not always obvious. Juno and Cheeta, both beautiful and rich, allow Titus to explore his complex relationship with women. His previous experiences were with his distant, eccentric and seemingly uncaring mother, Countess Gertrude; his clinging and neurotic nanny Mrs Slagg; his childlike half adult sister Fuchsia; the mercurial and mysterious Thing. Now he meets women on a different level, and experiences the good and bad to be found in an intensive relationship. Veil, ex-prison warder, and the Scientist bring Titus face to face with wickedness and evil. Both have a flavour of Steerpike, though the Scientist is far above Steerpike in the breadth of his evil. They give Titus an opportunity to consider how such people are dealt with, it is as if Peake is giving him another chance to explore his relationship with the dark side of the human psyche.

In some respects Titus Groan and Gormenghast are dystopian. Gormenghast, the castle, distorts reality, creates a new normality. There is enough of our world in the monster for us to relate to it, but in an almost historical sense. The weirdness of Gormenghast is felt as a separation in time between the castle’s inhabitants and ourselves. This, to some extent insulates us from the basic horror of life in Gormenghast. Titus Alone is a full blown dystopian horror. Time is no longer a barrier that separates us from Titus. He has stepped into our world, though our world as it might have been. The places that Titus visits are a heady mix of so many literary and Hollywood metaphors that the mind is swirled around on a dizzying journey. Although it predates the cult film Barbarella, there is a flavour of the labyrinth outside Sogo, the City of Night.

The book is, in many ways, more troubling than its predecessors. When reading the other books, although it was, probably, not apparent at the time, there is a cosiness about Gormenghast. Within its walls there were oases of comfort, the Prunesqualor’s and Fuchsia’s room, for example. In Titus Alone there is luxury, but it is, somehow, never homely, more like gilded cages. A lot of this book is dark, but not Gormenghast dark, this is the dark of the haunted forest where bright, shining eyes blink out when you try to focus on them.

The story is, in many ways, simpler than that of Titus Groan and Gormenghast, but that does not make it easy. It is, in my opinion, a much harder read than the other two. It is, more obviously, the old story of good against evil, but some of the time it is not actually obvious which is good and which is evil. Some have written that it is a book about social exclusion. This is, I feel, simplistic. The characters are not so much excluded as having chosen to observe from the sidelines. When they made choices, it was always to step further back. Considering that Peake was very ill, and must have known that he was dying, this probably reflects how he felt. Many, knowing they are dying, become almost observers of their own lives, and this is what many of the characters seem to be doing. They watch their own descent into hell.

Did I enjoy this book? No, in all honesty I did not. I actually gave up at one point as I found it difficult to care what happened to the characters. Had a volcano erupted and swallowed them up, well good riddance. I was reminded of the words of Countess Gertrude when she says that Gormenghast is all that there is. I wanted to go back myself as that monstrous castle was more like home than the realms in which Titus Groan was now existing. I chose “existing” carefully. Despite being chained by useless traditions, Titus seemed more alive in Gormenghast than out of it.

It is not an easy read, parts are difficult and thought provoking, but there is an underlying boredom to the book. I’m not sure that the boredom necessarily comes from the reader. Much of the book feels as if Peake himself was bored. He had put so much life into Titus Groan and Gormenghast that it was as if he had drained himself. Perhaps his own life force was draining away. There is a feeling, and I know others have felt the same, that Titus Alone is an unsatisfactory ending of the story. It is as if Peake felt that readers would want to know what happened to Titus when he entered the real world, so threw together ideas. A lot happens to him. He experiences many things. However, when it comes to it, the enthusiasm, that I and others have for books one and two, is simply not enough to last many pages into Titus Alone.

Is Titus Alone a bad book? Not at all. If you read it without knowledge of the other books, then it is an interesting dystopian view of a world gone wrong. There are echoes of Europe’s descent into fascism in the twentieth century. There is wickedness. There is the crassness of a ruling elite that parties on while society crumbles. However, if you’ve arrived here from Gormenghast itself then you will be making unsatisfactory comparisons.

If you read Titus Groan and Gormenghast, but can’t manage Titus Alone, there is nothing to berate yourself about. You got to this point on a diet of caviar, but Titus Alone is, at best, sardine on toast, a sardine, not more.

Do I recommend it? Well, it is an experience, but it is so unsatisfactory that I am tempted to say no. Perhaps, do not do as I did, go from Gormenghast straight into Titus Alone, leave a decent amount of time to elapse before you attempt it.