Steven Spielberg’s 1993 movie Jurassic Park is widely regarded as one of the most iconic movies in film history, and continues to bring dinosaurs to life for viewers across the world. Those who’ve discovered the film in more recent years may be unaware that it is actually an adaptation of the 1990 novel of the same name by Michael Crichton. Like many children, I loved dinosaurs as a child, and I can still remember the sense of awe I felt the first time I watched the Jurassic Park. I’ve seen the film many times over the years and, despite the advancements in filmmaking and CGI, it still holds up as a true classic and, like many others, it holds a special place in my heart.

I’ve been aware for quite some time the film is based on a novel, but it was only earlier this year I finally got around to giving the source material a go. While I’ve heard plenty of praise for Crichton’s novel, I felt a certain sense of trepidation at the thought of reading it. The film holds such a special place in pop culture, I wondered if perhaps the novel would serve only as a jumping off point for Spielberg’s vision, and might fail to live up to the level of quality found in the film. I can already hear fans of the book reaching for their torches and pitchforks, so I’ll cut to the chase, Jurassic Park is an excellent novel, especially for those who adore the film and are interested in diving deeper into the park that Spielberg brought to life. 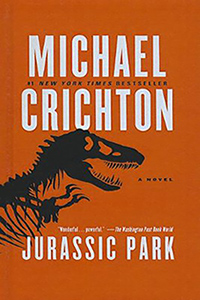 On paper, it could be easy to dismiss the premise of Jurassic Park as pulp fiction, after all, it’s a novel about an eccentric billionaire who manages to use genetic engineering to bring dinosaurs back to life for a theme park, but I was surprised at how far Crichton goes to make the reader feel that the science behind the book stands up to scrutiny. Most scientists would agree that, while Jurassic Park is certainly a fun idea, and an excellent way to introduce kids to dinosaurs, the science behind it all is far from watertight. After all, thirty years on we still don’t have the technology to resurrect dinosaurs, but I found myself being genuinely impressed at how much research Crichton must have done to sell the idea of his story. A lesser author would’ve just fabricated the science in order to make it fit the novel, and would’ve no doubt conjured up MacGuffin to keep the ball rolling, and thus the book may well have fallen into the realms of pulp fiction. Crichton does no such thing, and introduces readers to ideas in science, palaeontology, and computer programming that serve to convince readers that, perhaps one day, the feat of bringing dinosaurs back from extinction may one day be achieved. Equally, Crichton also introduces readers to Chaos Theory, to argue why such an endeavour would be doomed to bring disaster. While there is some make believe involved, I never expected for the novel to go as deep into the science required for an undertaking like Jurassic Park, and it’s clear Crichton put a great deal of effort into backing up his ideas.

Plot-wise, the novel transpires in much the same way as the film, though fans of the film craving more adventure will be pleased to learn not everything made it to the big screen. In the book and there are a number of new encounters to be enjoyed, including a scene where Alan Grant and the kids raft down a river while being pursued by the T Rex. The novel has much to say about man’s relationship with science and nature, our desire to play God, and the disastrous consequences these actions inevitably have. Crichton pulls no punches when it comes to examining just how new humans are to planet Earth and how our extinction would be no big deal in the great scheme of things, and we’re fooling ourselves by thinking we’re somehow separate from nature. As Ian Malcolm once said: “Life, uh, finds a way.” While these themes certainly weren’t omitted from the film, they’re certainly more pronounced in the book.

All the major characters featured in the film are lifted almost entirely from the novel. Alan Grant is the stoic dinosaur expert, Ellie Sattler the eager paleobotanist, Ian Malcolm, the charming mathematician who is now synonymous with Jeff Goldblum, and, of course, the park’s creator John Hammond. A number of small changes present include the fact Grant is actually quite fond of children prior to his meeting of Tim and Lex, Hammond’s grandchildren, as he appreciates children’s fascination with dinosaurs. Interestingly, John Hammond is also a far less sympathetic character, and is far more interested in his legacy and wealth than he is in the safety and ethics of what he has created. The changes certainly work for the film, but the original story works equally well and I soon found myself becoming just as invested in the book characters as the one’s on the big screen.

Dinosaur wise, all your favourites are here, and then some. I struggle to think of a popular dinosaur that doesn’t feature at some point in the novel, and it’s fun to explore a Jurassic Park that isn’t constrained by filming costs and can instead unleash all the dinosaurs its creator desires. Crichton does an excellent job in presenting the beasts as both terrifying and fascinating, and their appearance gave me the same feeling of dread and awe I feel when I see footage of a great white shark or a large snake. Crichton’s dinosaurs are both great and terrible to behold, and feel as though they might not only break out of Jurassic Park, but also out of the pages of the book. They are forces of nature rather than animals to be contained and exploited, and the human characters feel small and helpless in the face of these ancient lizards.

Given its high ambition, at no point does the book feel like it was starting to sag under the weight of its own grandeur, and I greatly enjoyed my trip through the park. This is definitely one for fans of the film to check out, and I could see both parents and brave, slightly older kids enjoying this as bedtime story. The film may be cemented as an icon in pop culture, but the book its based on deserves just as much credit. If you’re in the mood for adventure, then you should certainly take a trip to Jurassic Park.