Michael J Malone - Beyond The Rage

“Beyond the Rage enthrals and disturbs in equal measure.”

‘Even though he’s a successful criminal, Glasgow villain Kenny O’Neill is angry. Not only has his high-class escort girlfriend just been attacked, but his father is reaching out to him from the past despite abandoning Kenny as a child after his mother’s suicide. Kenny is now on a dual mission to hunt down his girl’s attacker and find out the truth about his father… but instead he unravels disturbing family secrets and finds that revenge is not always sweet.’

This is the third book in Malone’s successful McBain series, focusing this time on DI McBain’s pal, Kenny O’Neill, as the central character. Malone’s writing style is fluid and compelling, Kenny is a likeable villain and the reader is drawn into the seedy underworld that is Kenny’s life. Malone creates conflict, and introduces just enough information for you to feel sure that you know what is happening, while feeding you enough misdirection for you to miss it. It is a clever and complex tale, interweaving the life of a villain with the nightmares of childhood and the possibility of happiness. 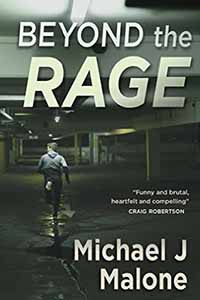 You don’t need to read the other books in order to enjoy this one. And it is a great read. As a writer, Michael J Malone is a skilled exponent of his craft. As a storyteller, Malone presents an exciting and page-turning adventure. This is is a book that you’ll find it hard to put down. Hard man Kenny O’ Neill is shown to be vulnerable in a world where weakness can get you dead. Malone takes the reader into Kenny’s world, with its harsh realities and retributions, creating suspicion and hope in equal measure.

Be prepared for a marathon reading session, as you’ll find it difficult to put this book down.