“A marvellous story that knows just how to grab the emotions.”

Firstly some advice, never read this book while waiting at the mechanic unless you want to find yourself sobbing! Yes, this really happened. By the end of chapter two of Goodnight, Mister Tom I had cried twice, and the touching, heart-wrenching dialogue and story-arc continued from beginning to end. 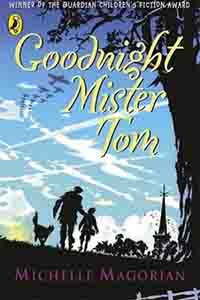 Goodnight, Mister Tom tells the story of a neglected child, evacuated to the countryside during World War II. He finds himself in the home of a curmudgeonly old widow and bit by bit, they mend each other, repair each other’s hearts and learn how to live again.

You’ll need tissues and I have no idea why I waited until I was in my 40s to read it, as it’s instantly become one of my favourite books of all time.

Goodnight Mr Tom by Michelle Magorian is one of my all time favourite books. I have read it several times over the years and each time it is still just as good as the first time. Although it is aimed at younger readers, I believe the emotions and the story can appeal to a large audience of readers.

A beautifully written book about a shy evacuee called William Beech who gets paired to live with the bitter Mr Tom Oakley.

As the story develops their bonds grow closer and stronger, becoming almost like a family unit. A unique perspective to look at the effects of war, the account of this fictional young Evacuee, William, covers some serious issues such as loss, home-sickness and dysfunctional families, that evacuees may have had to deal with.

A tale of the up and downs of friendship and family bonds during the home-front struggle of war. An emotive and sweet story that reduced me to tears, and filled my heart with a warm feeling in equal measure.No matter how many times I read this book, it never fails to evoke the same strong emotional response.