“Lyrical and urgent, the globalist novel evokes the dreams and disillusionments that follow Saeed and Nadia….and peels away the dross of bigotry to expose the beauty of our common humanity.”

Mohsin Hamid is rapidly proving to become one of today‘s most vivid and „topical“ writers. After his first stroke of genius, „The Reluctant Fundamentalist“, which dealt with political extremism and lost hopes, he now turns to the current refugee crisis.

He intermingles it with a modern and believable love story, and some faint touches of „magical realism“. The result is, again, utterly readable – and yet, this time, it mainly touched my head and not my heart. But this may be due to my own faulty „hard-wiring“, not to any lack of ability on the writer‘s part. 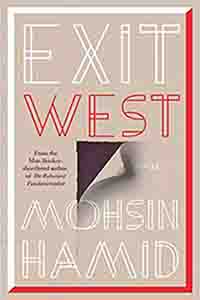 We encounter Saeed and Nadia, who live in a city and country in the East that are never named. (I‘d guess it was Syria, but it doesn‘t really matter.) They fall in love, but slowly war and bloodshed begin to erode their daily lives. They manage to maintain some semblance of nomality for a while, but soon they have to face the question whether to leave altogether, to save their future. They flee to the West, through one of the mysterious „doors“ that suddenly appear everywhere. But problems don‘t end there… life as a refugee is hard, and full of dangers of its own. Will their love survive these hardships?

I liked, once again, Mohsin Hamid‘s crisp and clear writing style. The sentences are not overstuffed, and yet sometimes there are passages of almost lyrical beauty. It was very clever to choose a couple as protagonists – in this way, he is able to show us two differing views. It‘s just like Mohsin Hamid to turn readers‘ expectations around, though: it is Nadia who is more resourceful and stragihtforward, while Saeed romanticizes and hangs on to the past.

What I also liked, was the portrayal of life in a country at war. It was touching to see how people cling to every last shred of hope, to every figment of normality. Small details become important, while others quickly lose significance. I was faintly reminded of Khaled Hosseini‘s books here and there.

I think it was courageous of Mohsin Hamid to include controversial issues in this novel. Nadia is a single young woman, who silently but steadily defies the religious laws of her country. Second, she and Saeed like to consume Marihuana throughout their time together, which I found astonishing. And third, throughout the book there were diverse sub-plots and scenes concerning homosexuality, male and female. Quite a feat, wouldn‘t you say…?

What I didn‘t particularly like, were the „magical“ elements (the mysterious „doors“), their life in London, and some of the additional scenes. Of course I do realize that the „doors“ are symbols, and serve as narrative shortcuts between the East and the West. But to my taste, this was just a little hastily done… like, „Beam me up, Scotty!“ The part of the story set in London is, well, a little cramped and faintly – hopefully! – exaggerated. I pray that we Westerners will never actually resort to violence against migrants! Thirdly, I couldn‘t for the life of me make much sense out of diverse scenes interspersed thorughout the book… they seemed so unconnected to the story… a Japanese businessman… an old vagrant in Mexico… nice to have, but not really enlightening.

On looking back, though, I‘d once again recommend this book. Mohsin Hamid is inventive, clever, and courageous. This time, some of his means just didn‘t work all that well for me.”