Neil Gaiman - The Ocean at the End of the Lane

“His prose is simple but poetic, his world strange but utterly believable—if he was South American we would call this magic realism rather than fantasy.”

Another new writer for me and I again I loved it, even if I didn’t fully understand the full story line at the end. Sounds odd? Well, hang on a mow … To start off, I don’t remember reading the main character’s name.

The story revolves around a seven year old boy who loves nothing better than reading his books. It begins with the boy as an adult driving down the lane where he used to live as a boy. He is dressed in black so the impression of he’s been to a funeral. But who’s? And why is he driving down that lane. At the bottom he parks by a farm house and walks off to a pond, sits on an old bench. He settles down and his mind goes back to when he was seven. 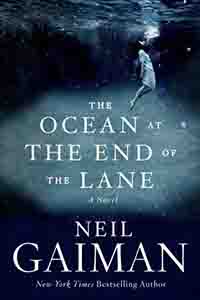 And that is where the story really begins. He meets an eleven year girl, who tells him that the pound is actually an ocean and explains that the ocean is everything and everybody. The story goes on from there and evil breaks out in various places, The girl, Lettie Hempstock, her mother and grandmother soon some them all out.

And at the end Lettie’s grandma explains it to the boy, but for once I just didn’t get it. However, as daft as it sound, I did enjoy it and I’ll be reading more of his later. So go on folks, give him a go if haven’t tried him yet.