Nick Fisher - My Dad's A Dick

“Written with his usual sarcasm and twisted humour and interjected with obscene jokes.”

Very, very funny indeed, any dad, or any adult for that matter will relate to this. Yes, the author can be coarse and vulgar (his first two books were described as making Fifty Shades of Grey look like Cinderella) but the way he recalls events and stories and ties them together is highly amusing and cleverly done.

Reading about some of the pranks he’s played on his kids had me in stitches and the stories of his own dad bringing home a stray dog from Liverpool (drunk) and a con man with a monkey that he came downstairs to find swinging off the lampshade when he was seven years old were brilliant. Humour apart, I also get the feeling he’s a doting father, and the bit at the end about not wanting his kids to grow up will strike a chord with any parent. It also includes several photo’s that relate to the stories he tells. 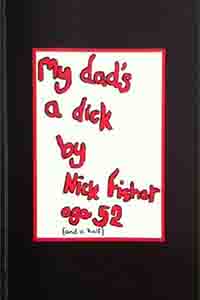 Well worth a read, but you will need a broad sense of humour!!