“The honesty and toughness of this novel is what makes it so beautiful to read.”

The combination of well-written chapters and emotion makes the novel a little overwhelming to read at times. Broken is about a young Maori man and shows how he comes of age. It is a very powerful story, giving readers full access to all of the characters’ thoughts and feelings. It is the kind of novel that leaves you feeling bittersweet.

Broken captures the reality of a Maori male exploring his sexuality and identity while growing up in a hard-skinned environment. This novel focused a lot on men, and how a lot of men disregard their emotional side in fear of others assuming that they’re ‘gay’ or ‘weak’. 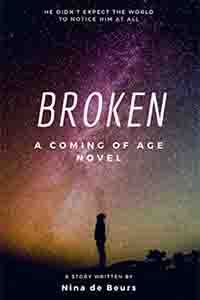 Often men – especially men of color – are taught that they need to be ‘hard’ if they want to be considered a ‘real man.’ They are shunned if they don’t fit the criteria of being ‘a real man.’ Aspects such as the clothing they wear, the movie’s they watch, the music they listen to, the way they walk, and the way they speak are aspects that contribute to how they are judged. We see this pattern a lot in the real world, but it isn’t addressed as much as it should be.

The book is heavy, and many might find it overwhelming to read at times, but we need to start checking ourselves. We shouldn’t be treating femininity and being ‘gay’ as signs of weakness. What makes someone a man? What makes someone gay? We shouldn’t be labeling men or questioning their identity based on traits that don’t fit in with the criteria of being a ‘real man.’

People also need to stop going on about the idea of being a ‘real man.’ Making our boys think that in order to be a real man they have to lack empathy will lead them into a rough life filled with flawed relationships and hard times. Making them believe that they need to hide their feelings because it’s ‘gay’ or ‘weak’ is wrong in so many ways.

Although not all readers will know what it’s like to grow up in a hard-skinned environment, they will get a feel of what it is actually like growing up in those circumstances. The honesty and toughness of this novel is what makes it so beautiful to read. It is honest and even though it is a heart warming at times, Nina de Beurs doesn’t sugar coat or glamorize anything.