“More than thirty women from Ovid’s Metamorphoses . . . reclaim their stories in this stirring collection of vignettes. The women of MacLaughlin’s retelling drink kombucha, dabble in oxycodone, wear jeans and sneakers, and call the King of Thebes “this asshole jock.” Above all, they both suffer and find strength at the hands of lascivious men and wrathful gods.”

Retellings of classic Greek myths seem to be popular right now, especially those that are told from the female characters’ point of view. “Circe” by Madeline Miller, “A Thousand Ships” by Natalie Haynes, and “The Silence of the Girls” by Pat Barker come to mind. Add to this list “Wake, Siren” by Nina MacLaughlin. The subtitle of the book is “Ovid Resung” so the book is a collection of retellings of the tales from Ovid’s Metamorphoses. All the well-known ones are here: Daphne, Arachne, Echo, Io, and Medusa. There are also many others who are not so well-known except perhaps to those who are quite familiar with the source material. 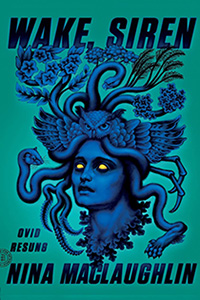 The combination of modern day elements with characters from Greek mythology who exercise god-like powers might be considered jarring by some readers, but I thought it was well-done and underscored the timelessness of these stories. The story of Myrrha, who developed a sexual obsession for her father, is presented as a two-person conversation between Myrrha and her therapist. There is a fair amount of violence in some of these, as there is in the source material. Those who are faint hearted may wish to steer clear of the story of Procne and Philomela. The retelling of the story of Euridice was especially creative, transferring the time frame to the modern day and presenting the characters of Orpheus and Euridice as rock singers. In the final scene the author also cleverly manages to include several other familiar figures from Greek mythology.

As expected, the female mortals do not fare well in many of these stories. However, after centuries of hearing only a one-sided version of classic Greek tales which concentrates mainly on the male heroes, it is refreshing to hear from these women who have been voiceless for so long.