“The author O.G ARION forces the limits of the human mind, masterfully describing a different apocalyptic and suspenseful world, a story that will remain in your mind and that you will not forget.”

RUN! O.G ARION- A captivating thriller from a dystopian world

“What if tomorrow will be your last day on this earth? What if, starting tomorrow, everyone you know will disappear? And what would you do if you had to forget who you used to be?

Keep going. Don’t look back.
They are out there. Watching. Waiting. All you can do is run!” 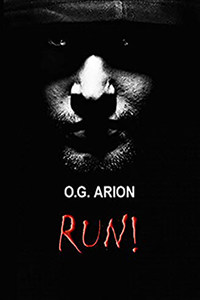 From the moment the world becomes dominated by a virus that spreads through mobile phones, everything changes. People infected with this virus turn into animals, beings that, although they retain their human form, lose their judgment, emotions, or feelings.
An apocalyptic story about a world during chaos, a world where the survivors are hunted, and everything becomes a fight against the clock. A world created in a visual, authentic, and alert style, which keeps you in suspense from the beginning to the end.
The book catches you in the complex and impeccably constructed action page after page, and the fight becomes tighter and tighter. Run, it unfolds exactly like a horror movie in which the alternative is to run to survive, fight to live and kill so as not to be killed. The fear of the characters, their secrets, the unpredictability will accompany you throughout the reading, coming to live with them, hope, love them, and fear for them.

How far would you go to fight for survival?

“We can go back. We can find ourselves damned by humanity.
– When is the world the way it is? Look around.
– I do it every day. And I still haven’t stopped hoping. “

The author O.G ARION forces the limits of the human mind, masterfully describing a different apocalyptic and suspenseful world, a story that will remain in your mind and that you will not forget.