“Patrick Dacey is an old-school storyteller, a pure novelist reminiscent of another era.
The greats come to mind reading The Outer Cape–Updike, Didion, Stone, Yates–but his voice is wholly his own.”

This novel, set in New England is about Robert and Irene Kelly, and thier two sons Anthony and Nathan.

The first half of the book tells us that Robert is a fairly successful Real Estate man, Irene was once a budding artist and the brothers have a pretty happy life. But at some point Robert will over step himself in a shady real estate deal which will eventually break up his marriage. 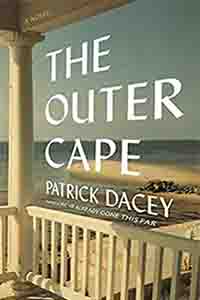 The second half picks up years later where the former family will once again be brought together, but under sadder circumstances. We will learn what happened to the brothers over the years, and how different their lives became once the family broke apart.

I enjoyed the first half of the book more than the second half. It is a debut novel and at 283 pages can be a quick read.

It’s a little better than average and its fine for a quick knock off.

This book was a former Amazon book of the month pick.