Patrick Ness - And The Ocean Was Our Sky

“Ness’s imagination is often awe-inspiring; he goes to places no whale has gone before and is never short of a deep thought. This is not just a story about hunting whales, it’s a comment on the futility of war, and the myths that we create and use as excuses for our actions.”

Moby Dick told the story of the hunt for a great white whale that was seen as a kind of devil –Leviathan was the devil in the Bible – though ultimately hunter and hunted perished together. In Melville’s time, whales were approved prey and ships set out in search of whale blubber and other wealth from the sea Ness writes the story of a whale in search of the man who has wounded her with his harpoon – not a great white whale, but Toby Wick whose ship has a white hull. Alexandra inducts young whales into her cause and the pod of whales relentlessly echolocate ships and destroy the men who sail in them. 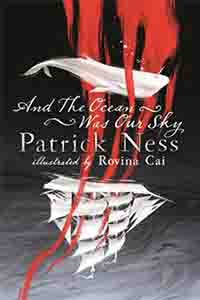 Bathsheba, the youngest recruit ultimately discovers that all men are not bad – after they find a young man called Demetrius still living in the ruins of his ship and take him prisoner. She and Demetrius share names, the first step in a bonding that can only end unhappily since the prisoner is condemned to death as soon as he tells the whales how to find Toby Wick. The young whale, a mere Third Apprentice, in Captain Alexandra’s navy, begins to realise that those who hunt are doomed to destroy their own souls whether whales, men or the sharks that attack whale calves with their mothers.

Taking a gentle creature like a whale and turning it into a beast of vengeance, obsessed with power puts a twist on the scenario which modern readers normally attribute to great white sharks. It also gives us insights into the nature of obsession.

Ness evokes the floating world that lies in the depths of the sea and the Abyss with chilling power helped by Rovina Cai’s illustrations. How the whales keep the young man alive underwater is a powerful stroke of imagination and whale knowledge – reminding us that whales too are mammals and require oxygen. Older children and many adults will find the book intriguing – whether they have read Moby Dick or not – though darkness floats side by side with wisdom in every page.