Discovering a series like this is a little like finding a fiver down the back of your settee, or a supermarket trolley with someone else’s £1 in the lock). The first book, Master & Commander is an exquisitely turned out novel, scripted with great panache and wit – o’Brian was an experienced novelist before he came to write M&C. The treat, however, comes when you realise that he went on to write another 19 books in the series, each one better than the last (he rather selfishly died in 2000, halfway through #21). 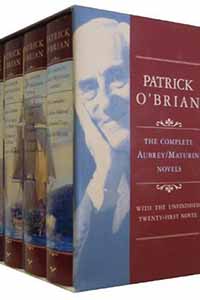 It is, on the surface, an historical adventure series. And there certainly is plenty of adventure. Naval battles and raiding expeditions, espionage, romantic liaisons, storms and shipwrecks. One of the joys of the books is their immersive nature. While ‘o Brian was apparently an incompetent sailor, he was a meticulous researcher and each book is a wealth of nautical and historical detail, a maze of mizzen-masts, a labyrinth of lubber’s holes and a close-hauled confusion of cats’ heads, coamings and clew-lines. While this might at first appear to be a bad thing, you quickly come to realise that you are in good company for Stephen is just as bewildered by bowlines and buntlines as you and much of the series’ humour derives from his inability to tell larboard from starboard. Even after 20 books at sea, he still cannot climb into a boat without falling in the water and that makes your own ignorance easier to bear.

And there is so much humour to be had. This is no po-faced “Midshipman Hornblower”. True, o’Brian occasionally overplays his comedy but, for the most part it is a gentle sort of humour, playing off Jack’s simple, trusting nature and consummate seamanship against the lubberly Stephen’s more sophisticated wit and wisdom.

While he never seemed to have gained the fame or audience in the UK of Cornwell’s Sharpe or Forester’s Hornblower, o’Brian is something of a demi-god in the US (and rightly so) and the series even spawned a pretty decent movie (although Russell Crowe and Paul Bettany were badly miscast as Aubrey and Maturin). This is a glorious epic, comedy, tragedy, adventure, romance and history lesson rolled into 20 books that you will read over and over again. I have just finished my 5th pass and am replacing the paperbacks with eBooks so that I can be sure that I’ll be able to come back to them again. And again.

I shocked myself just now by calculating that I have spent about £200 on the paperbacks and their eBook replacements. Shocked but by no means resentful – its the best £200 I ever spent.

“Two weevils crept from the crumbs. ‘You see those weevils, Stephen?’ said Jack solemnly.
“‘I do.’
“‘Which would you choose?’
“‘There is not a scrap of difference. Arcades ambo. They are the same species of curculio, and there is nothing to choose between them.’
“‘But suppose you had to choose?’
“‘Then I should choose the right-hand weevil; it has a perceptible advantage in both length and breadth.’
“‘There I have you,’ cried Jack. ‘You are bit – you are completely dished. Don’t you know that in the Navy you must always choose the lesser of two weevils? Oh ha, ha, ha, ha!’”