“An essential book for anyone who wants to Polari bona!”

Fabulosa!: The Story of Polari, Britain’s Secret Gay Language is a compelling and thoroughly interesting history book by professor of English at Lancaster University, Paul Baker. The book is a detailed exploration of the language of Polari which was used by LGBTQIA+ people during a time at which their existence was illegal and therefore they needed to disguise the fact that they were gay as well as obscuring what they were saying to anyone who wasn’t in the know.

The author, Paul Baker, has previously published several books including American and British English (2018) and, with Jo Stanley, Hello Sailor (2003). He also regularly gives talks and workshops about Polari. The introduction of Fabulosa explains how Paul Baker first got into researching Polari when he was writing his PhD thesis. 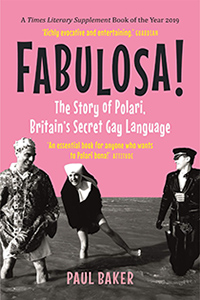 In 2001, Baker finished his PhD thesis on Polari and a year after that it was published in book form, Polari: The Lost Language of Gay Men, with an academic publisher. Around the same time, he also published a shorter Polari dictionary entitled Fantabulosa. Fabulosa, published more recently is a less academic, jargon-filled history of Polari which makes for a more enjoyable read for the general masses.

Fabulosa is jam-packed with research conducted by Baker, some of which is second-hand from other sources, books, publications, radio scripts, TV etc. while other sources of information come from interviews conducted first-hand by Baker himself as part of masters thesis.

Baker’s Fabulosa explores Polari from many different angles including; explaining what Polari is and who would have used it. He examines the conception of Polari and the various places Polari may have borrowed from – such as Cant slang, Italian, Romany, Cockney rhyming slang, and backslang – to create a useable language.

The author reminds the reader of the social and historical contexts of being gay during Polari’s usage. Plus, for reader’s outside Britain, Baker also explains, in short, some of the references that are related to the British experience.

As well as detailing how Polari came to be, how it was used and by who, Baker also explores the language’s rise to popularity via sketches on Round the Horne. He then goes on to suggest the reasons for Polari’s demise, resulting in its status as a ‘lost language’.

Following this, Paul Baker then informs the audience about Polari’s future, the ways in which its been – to an extent – revived for a comeback through academic circles, art, the Sisters of Perpetual Indulgence and even cocktails in high-end London bars.

The back of the book also features a glossary of Polari words and phrases alongside their meanings, which certainly helps the reader to translate sections of the book which feature quotes or scripts that heavily feature Polari. Readers may also note, however, that many of the words, with the same meanings, have slipped into modern slang. This aspect of Polari and its impact was not touched on much in Paul Baker’s book but this may be due to the fact that it is hard to research why some words survived while others did not.

Paul Baker’s Fabulosa is a truly detailed and entertaining history of Britain’s LGBTQIA+ scene and Polari, the secret language chiefly used by gay men (and to a lesser extent women) in the 1940s and 1950s. The author tells the story of Polaris with pride and humour, peppering in his own personal anecdotes to bring warmth and connection to the book.