Philip Gooden - May We Borrow Your Language

How English Has Stolen, Purloined, Snaffled, Pilfered, Appropriated And Looted Words From All Corners Of The World

“Written with wit and aplomb as he reveals the history and details on words as diverse as cwen, lust, delphinan and bathos.”

The English are at it again, looting and pillaging as they have done through colonial times. The only point is, this time it’s not the Kohinoor or the wealth of Bengal that they are accused of running off with but a wealth of language.

Philip Gooden’s book is designed to tell us how English became the rich language it is today – aptly illustrated by the number of synonyms for loot on the cover. Actually ‘borrow’ is probably the best word since the original ones still remain in the languages they came from and the language has in some cases transmuted the word. 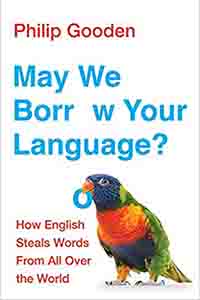 Gooden chooses to organize his book differently. According to him English disponges from other languages. Disponge by the way is a word that Shakespeare use to describe squeezing out of a sponge. The word did not survive, but English continued to sponge with vim and vigour Gooden provides a list of the stolen words starting with the earliest – ‘thing’ for example, is spelled with a Viking thorn instead of a ‘th’ since the ‘th’ did not then exist in the language – and while talking about the word, taking the reader back through a kind of history of similar words and where they came from.

The book is entertaining and rich, highlighting the fact that English has never stood still – one of the latest words dates to 1954. But then, that would apply to an Indian language like Bengali as well. Languages have the freedom to reach out and borrow and then reinvent themselves all over again. In the process is a kind of shapeshifting that Shakespeare would have appreciated if it had been pointed out to him.