“a short story by Philip Van Doren Stern, privately printed as a Christmas card to the author’s friends in 1943.”

The Greatest Gift is a short story by Philip Van Doren Stern which was the inspiration for the much loved Christmas film; It’s a Wonderful Life.

The story came to Stern in a dream, and he first published it in a small booklet which he sent out in his Christmas cards in 1943.

Despite being a short story it is beautifully written with detailed descriptions that set the scene. A heart warming story, in which George who is on the brink of ending his own life is shown by an angel what his life and the lives of those around him would be like without him, in a similar way to the ghosts in A Christmas Carol. 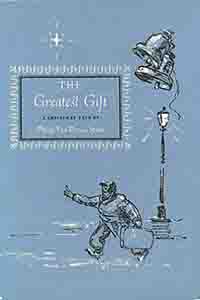 A heart warming and brilliant story that highlights the importance of every single person, letting you know that no matter how low you feel you are always important especially in the lives of others.

If you’re looking for something to read this Christmas I would strongly recommend this sweet story and because it’s only short you can squeeze it in your manic preparation for the big day.