“On an excursion by turns thrilling and perilous, who knows where Kitten might land up next?”

A girl who has lost her mother is bought a puppy by her father to keep her company. The only problem is that Margi wants a cat, not a Chihuahua and she tries to indoctrinate her bewildered puppy into cat hood starting by christening him Kitten. This would have been story enough for young readers who would giggle through the pages, but Garegrat has other intentions.

Kitten is determined to escape from the cushions that confine him to TV watching – Cat TV – and he realizes that Chihuahuas can jump vertically. With his escape from the sofa and the house comes another adventure – being lost on a highway, being rescued by cops and then tracking down a pet thief through Chihuahua sixth sense. 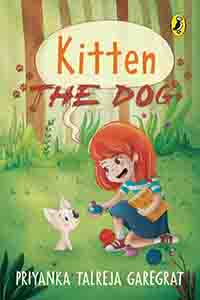 Garegrat throws in all the ingredients – Kitten is the sort of dog whose dialogues make you go Awwww, he has the knack of landing on his feet no matter how difficult the situation. He is also given the status of being the first missing dog to be found through social media, something else that kids are bound to appreciate.

Garegrat also has statements to make about single fathers and their daughters which many parents will relate to and about the insecurity of children deprived of their mothers that results in odd behavior patterns like trying to turn a dog into a cat. The illustrations are cute, the chapter headings arresting, but perhaps, in these troubled times, the pet thief need not have had a Muslim name.